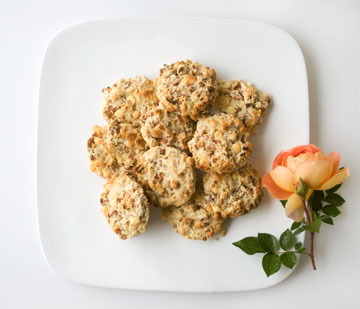 When I’m expecting guests to visit my garden in the morning, I want to give them more than roses. The garden is at it’s most beautiful in the a.m., and a table laden with scrumptious Apricot, White Chocolate Scones, coffee and tea is a cozy greeting for garden lovers.

Since I’m always asked for the recipe, I thought it would be fun to share it here. My daughter, Anna, adapted the recipe from Simply Scones by Leslie Weiner and Barbara Albright. 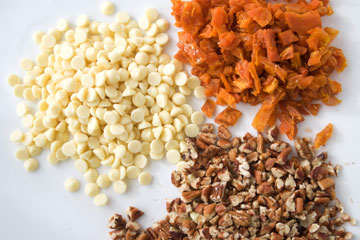 Over the top ingredients: a cup each of white chocolate chips, dried apricots, and pecans. 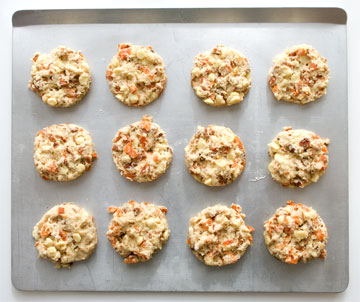 The recipe makes a dozen generous scones. I use an insulated cookie sheet for even browning. 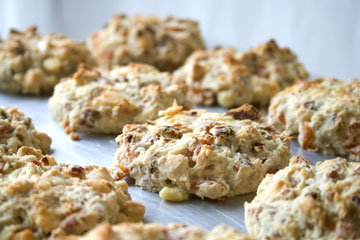 Fresh out of the oven. 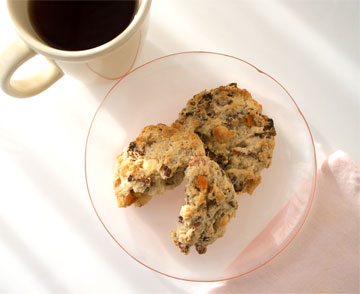 Obviously these scones aren’t diet food, so I originally worried that calorie conscious folks would shy away from them. I’m continually proved wrong on that front. For the scones photographed here, I used 1% milk, because I wanted to get the pictures taken, rather than go shopping for whipped cream. They turned out great, not quite as rich, but definitely fabulous. Sometimes I serve them with a bowl heaped with thick whipped cream.

Preheat oven to 375° F.
Sift the flour, sugar, baking powder, and salt into a large bowl. Cut the butter into ½- inch cubes and mix (I use my hands) with the flour mixture until the mixture resembles course crumbs. In a small bowl, stir together the cream, egg, and vanilla. Add the cream mixture to the flour mixture and knead until combined. Knead in the white chocolate, pecans, and apricots.
With lightly floured hands, pat the dough out onto a floured board until it’s a generous ½ inch thick. Cut into 2 ¾ inch rounds with a biscuit cutter. Bake for 15 to 20 minutes, or until the top is lightly browned. 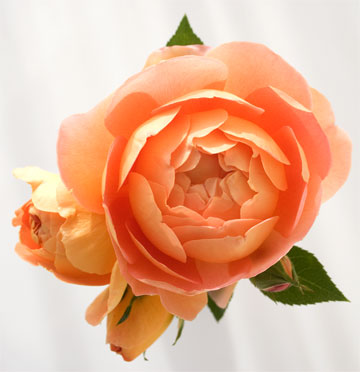 'Pat Austin' is named after David Austin's wife, who is known for her stone sculptures that enhance the Austin display garden in Albrighton, England. The bright copper color on the inside of these deeply cupped roses is tempered by a paler copper-yellow on the outside.