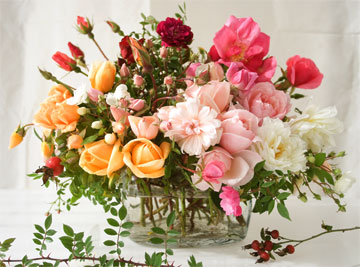 In November, emails were flying about Miriam Wilkins being honored for her rose world accomplishments by the city of El Cerrito. If possible, we all wanted to join her on her special evening.

Several people hoped to bring bouquets, but had no roses. Kristina Osborn asked if I could make a small old rose bouquet for Miriam. I said, “Oh yes, but I’m not sure how many old roses it will have.” On December 2, the morning of the event, I went hopefully into the garden in search of old roses. To my surprise, I ended up with so many I thought I should type up a list for Miriam. A few were still in bud, a couple had only one bloom each, and two were there in hip form, but the list contained 29 old or ‘oldish’ roses. I thought that was pretty amazing considering we were 19 days from winter.

I think of bouquets in stages, like cooks think of recipes. Here are the how-tos for 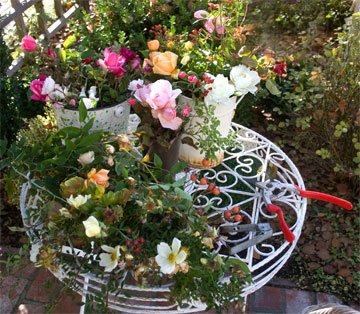 Two buckets of blooms and tangle of branches waiting for prep.

1. The harvesting was a thorny affair since I was using Happenstance, R. multiflora, R. rugosa, and Jeanne La Joie branches as a filler. 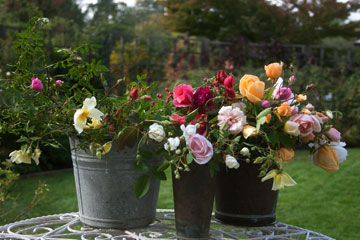 The prepared rose greens and roses waiting to be arranged.

2. Preparation included removing unsightly guard petals and removing lower leaves, and thorns so stems would not get caught on insertion. 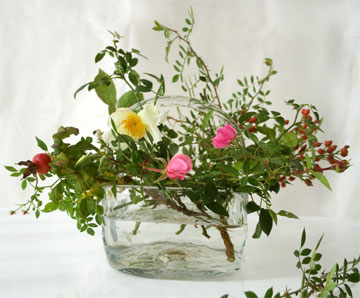 The glass basket with a handle was chosen for ease in transporting the bouquet eventually to Miriam’s home.

3. The branches went in first to form a stable armature to hold the roses. Now is where I usually say, “The roses go in with ease.” This bouquet was a fussy production. The insertions went pretty well in the front, but I didn’t have enough full blooms for the back. It looks good in the picture at the top of the page, but later I added some David Austin roses to the back section for more fullness. 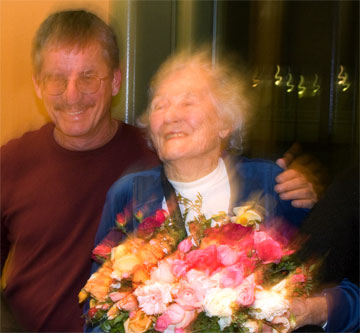 Miriam was so happy! I love this picture of her with Gregg Lowery. I’m not used to photographing with a flash––the arty touch is thanks to my confusion.

Here’s the rose list ––all the roses are linked to helpmefind so you can find out more about them. Be sure and click on the ‘photos’ tab to find additional pictures of the featured rose. 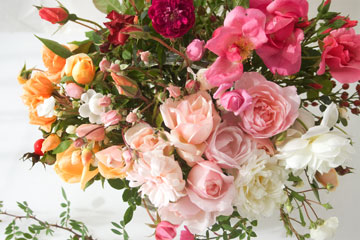 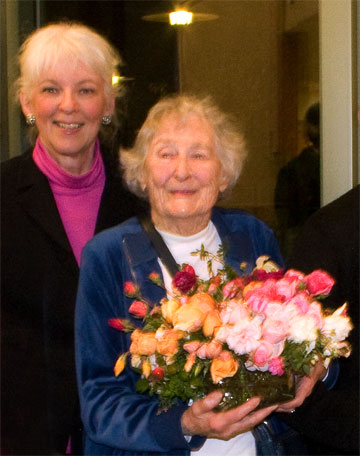 Miriam called to tell me how much fun she had identifying the roses. She said the bouquet lasted a long time. (That's because there were so many buds, especially of singles, which open so easily if harvested when the sepals have just separated.) 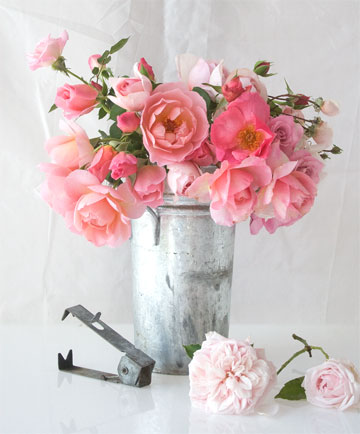 A recent tryst with ‘Climbing Pinkie’ inspired this tale. After fertilizing roses in the pink bed surrounding our house, twice in one month, a good crop of fall blooms were ready to arrange. ‘Pinkie’, a one-year resident planted near our front chimney, was not too impressive before the feeding, but after, I noticed she was finally lengthening, blooming, and had well-padded stems of shiny foliage. It occurred to me that she might work as filler for a bouquet I had in mind. 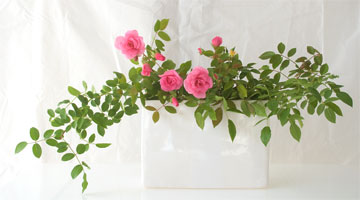 1. I harvested 4 blooming lengths of ‘Pinkie’ and a bucket of mixed pink blooms. All the while, I kept the vase in mind to try and gauge how much material I’d need for a generous look.

2. The lower leaves and thorns were whisked off the rose stems, with a dethorner (shown in the top photo), before placing them in the bucket. Thorns will snag on leaves and other stems during insertion.

3. ‘Pinkie’ branches went into the vase first and I was thrilled to see how much character the lush foliage had.

4. The showy roses went in next–with one limitation–‘Souvenir de la Malmaison ' stems (shown laying on the table in the top picture) were so short they had to be placed pretty much near the lip of the vase. Placing the other roses was a pleasure, because ‘Pinkie’s’ support allowed them to stay put. There’s nothing more frustrating than roses that flop around, unable to take their place with ease. This way, you can prominently display the face of each bloom. It’s also not a big deal to remove and replace stems as you experiment. 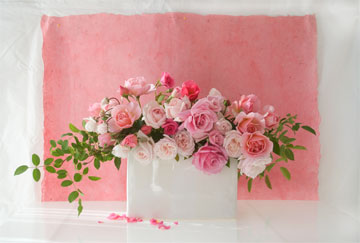 A couple days later, I removed the spent blooms and left the ‘Pinkie’ branches. I actually liked the simplicity of the look better than the bloom fest above. Buds continued to open for at least 6 days and the easy free-form look of the leaves had me smitten with a new rose, once again.

During the summer, I considered removing ‘Climbing Pinkie’ from the garden–not now–she’s here to stay. 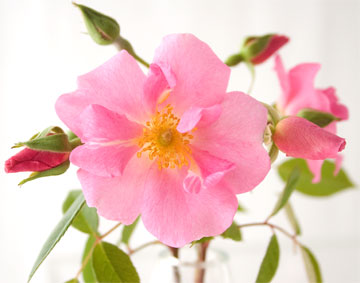 ‘Climbing Pinkie ’ is a sport of the Polyantha, ‘Pinkie’ discovered by E.P. Dering around 1952. This rose, is almost thornless, quite vigorous, and in my garden, is mildew free.