Rose of the Week – 'Chevy Chase' Part I 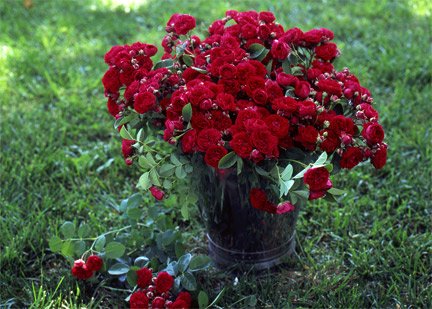 This week, I’m putting the vase before the shrub, because my garden's most recent incarnation of the rose ‘Chevy Chase’ is not yet ready to be photographed. For those of you who aren’t familiar with this unique rose, try to picture the shrub from the photos here, and see if your imagination comes close to the real thing. Part II will post a few days from now. 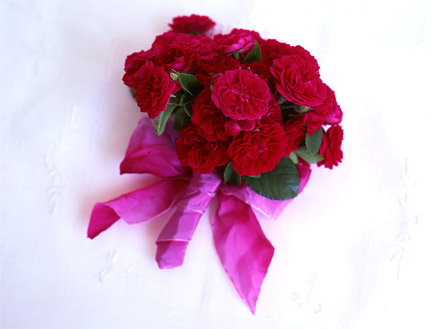 Originally, posies were fragrant hand-gatherings of flowers that women, and even men, carried to mask the unsavory scents of the old world. Today, they've inspired an indispensable method for arranging roses.

Flower arrangers gather one bloom after another into their hand, and enjoy the process of how good the flowers look together as the bouquet expands. 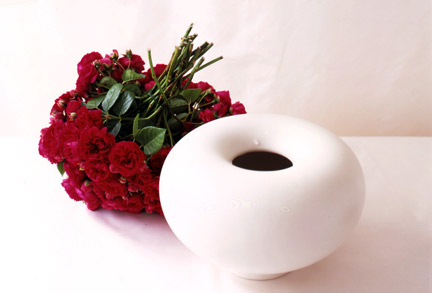 The posey stems, above, are wired to form a nice poof. The wiring creates a mobile bouquet that's fun to experiment with. I like to see how the bouquet looks in different, similarly sized, containers. Following are three distinct looks. 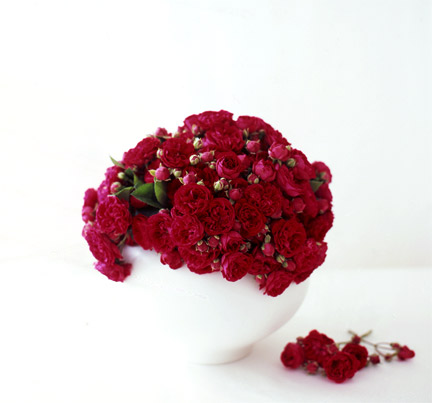 This is a modern look in a beautiful Klein Reid vase available at Florali. 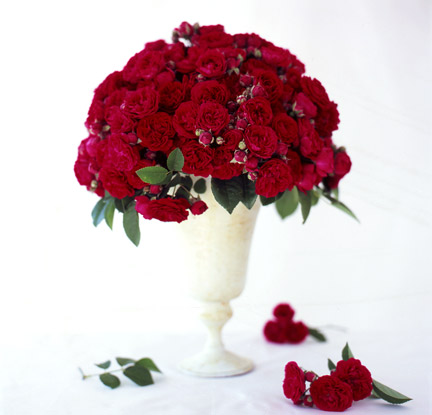 The roses take on a traditional look in this metal urn. 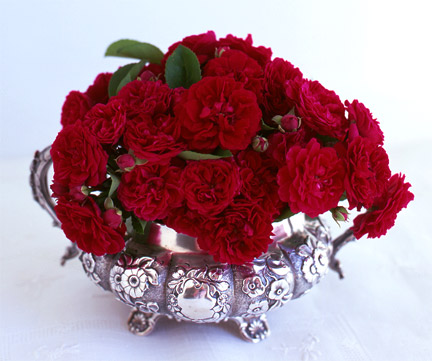 Silver repousse lends an air of opulence to the blooms. All three treatments would look good as a dining table centerpiece. 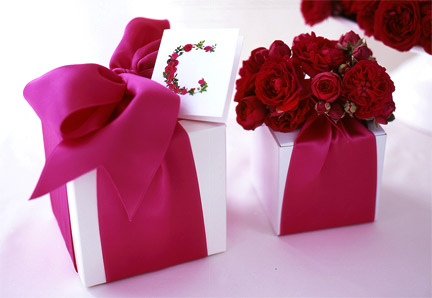 Let It All Hang Out

The next two images give clues to how the shrub grows. However, I have some surprises for you next post, you'll see 'Chevy Chase' growing three different ways. 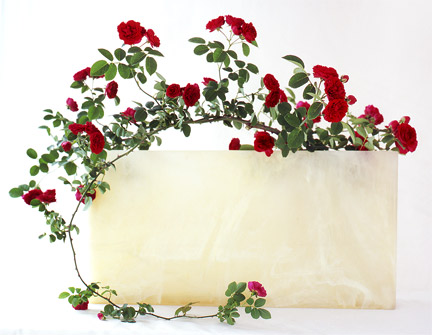 This is an acrylic vase by Martha Sturdy, also available at Florali. One cane of 'Chevy Chase' makes a dramatic statement, and holds its own in this large container.

That's me when it comes to arranging roses. Anything for a picture! 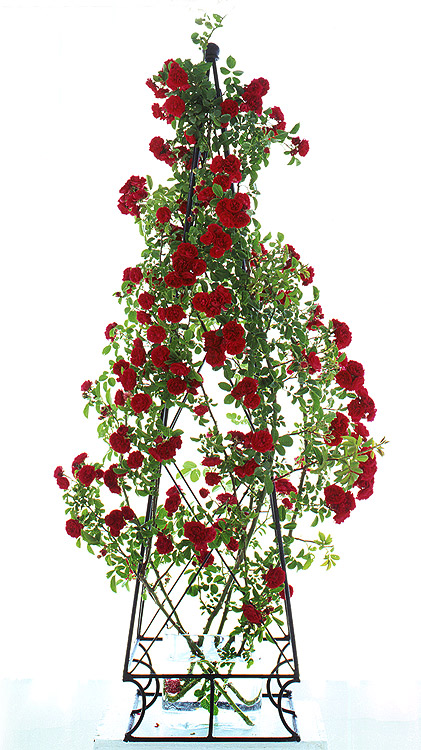 When I saw the open base on this 5-ft. tall tuteur, I noticed that a square glass vase would fit nicely inside. I thought, why not try placing long canes in the water and weaving them up through the wire. It worked beautifully and once again I marveled at how cut canes last very well in water. 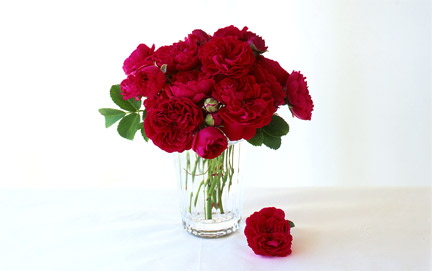 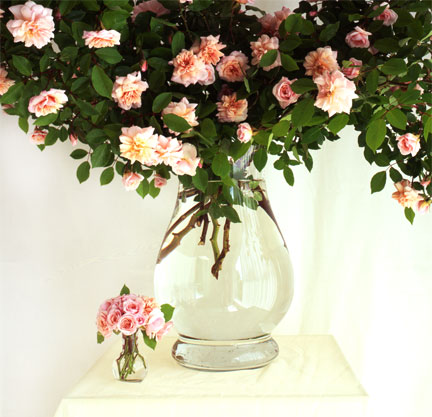 Have you ever marveled at how hefty rambling roses have small delicate blooms? Both the mighty and the mini traits of 'Climbing Cecile Brunner' make her a great candidate for arranging. 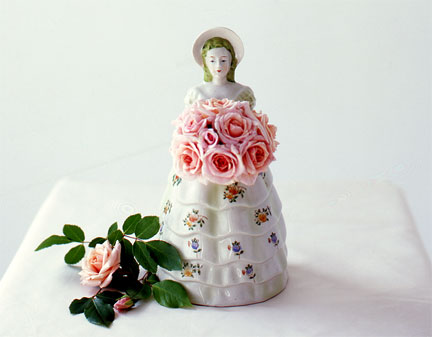 Make sure you never pronounce her name Cecil. She is Cecile, and I can’t tell you how many times rosarians have corrected me, even while I’m giving a talk (I do know better, but habit can be a problem). 'Cecile Brunner' was named after the daughter of a French nurseryman.

I had to buy this porcelain milkmaid, because she had green hair (my favorite color), and I thought there might be a photo op with her and Mlle Cecile. 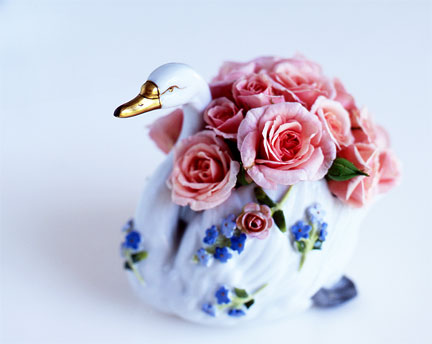 CB is also called “the sweetheart rose” and was often found planted near the graves of children in old cemeteries. CB probably inspired tiny porcelain roses, commonly found on pieces like this swan . . . 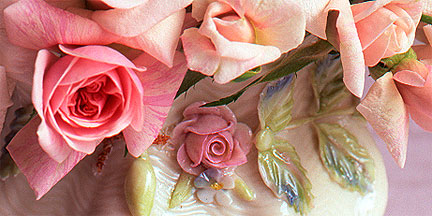 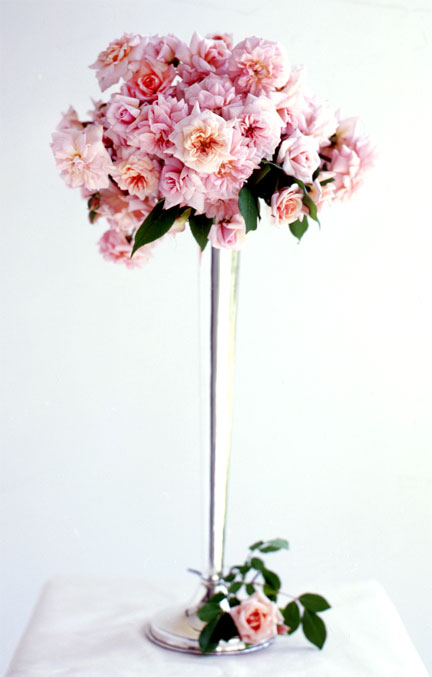 More elegant than sweet, this thin silver flute gives the posey a nice elevation. All three of the above small arrangements could benefit from tieing the stems with a little wire or string to keep the blooms close and compact. 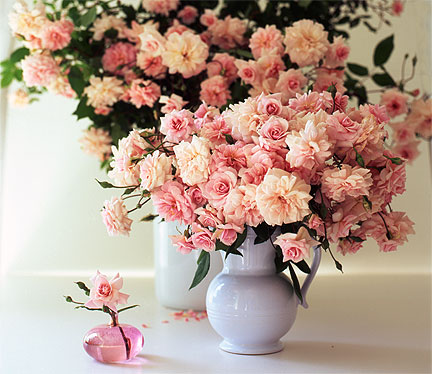 My days as a fashion designer have translated into making small, medium, and large statements with roses. I’m always urging you to try new things. With this rose, arranging experiments can be endless. A large porcelain jar in the back holds big canes. The pitcher has a hand-gathering of panicles (laterals on long canes), each is really a bouquet-on-a-stem. My husband bought me the little pink vase in Venice. 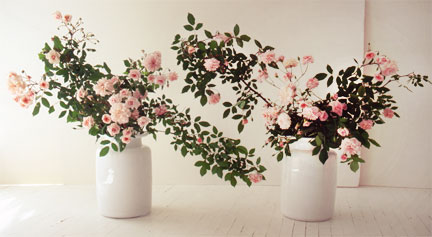 Large bouquets are often required, by the pair, at special functions like weddings and theatrical or presentation events. I often work on both arrangements at the same time. I’ve also arranged, in tandem, with another person, which can be really fun. I made this pair to show you how expressive big branches can be. Working large with CB is a challenge, because of the thorns. I always wear protective gloves. I make sure to cut the thick canes under water, and I might even smash the ends with a hammer to make sure the water is taken up. I’m always amazed that big branches last so well. Wilting is never a problem. 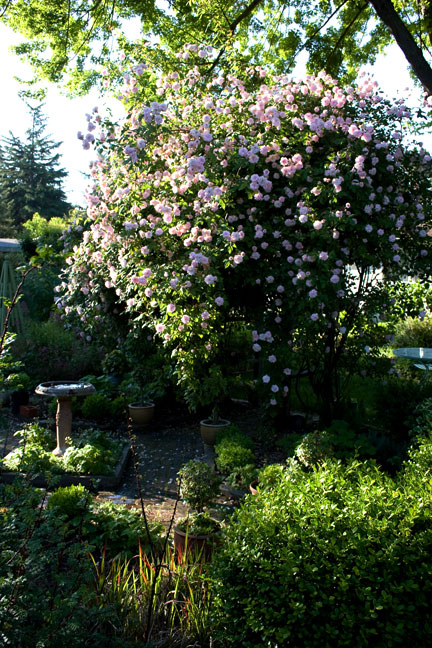 ‘Climbing Cecile Brunner’ must be the most popular climbing rose in California. In the Bay Area, where I live, it definitely is. Our local Trader Joe's sports five new climbers on its east wall; Lafayette’s city square must have 25 or more planted on a series of pergolas; huge mounds of CB decorate our freeways. If you look over the fence in many a home garden, you might find it trained into submission, or it could be devouring garages and garden sheds.

I wonder how many people who plant the climber know what a ferocious grower this innocent looking rose is?

Of course, I had to have my own 'Climbing Cecile Brunner', what self-respecting brand new rose lover wouldn’t want a gorgeous arch blooming with these tiny charmers? I mail-ordered two climbers  and a metal arch. I wanted a romantic entrance to a parterre, which led to a bench in our back garden. 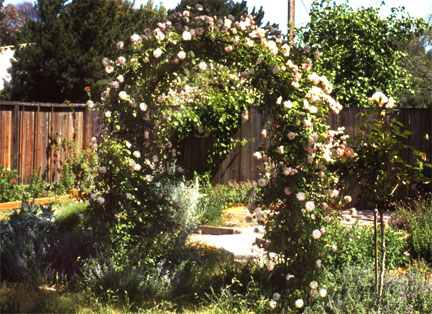 Here’s the arch in 1990, its first year, the lawn isn’t even in yet, but the roses met at the top, and they were only bands to begin with. 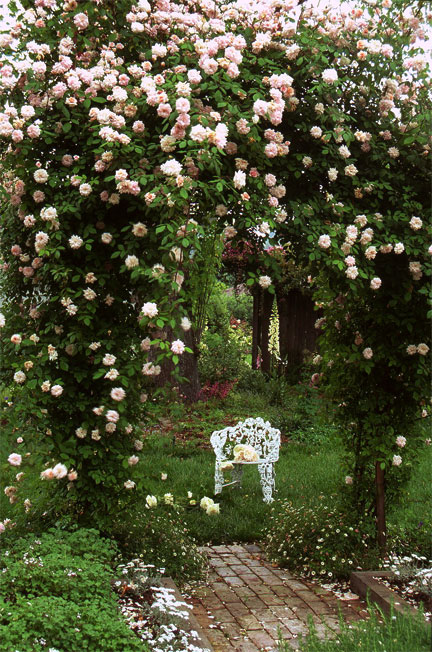 Two years later, the arch became my photo muse. This is how it appears in my first book The Poetry of Roses. By 1995, the arch had buckled and was propped up with 2x4’s. 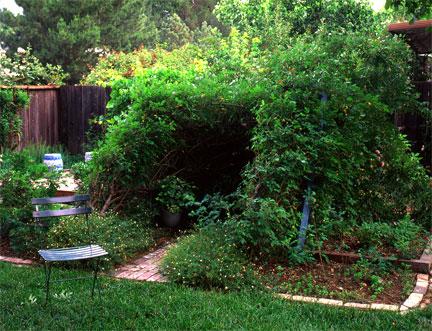 In 1997 the whole thing toppled into the parterre. Plonk! A wire connected to a massive silver maple, thirty-feet away, held the arch back in place until we could build a more sturdy structure. 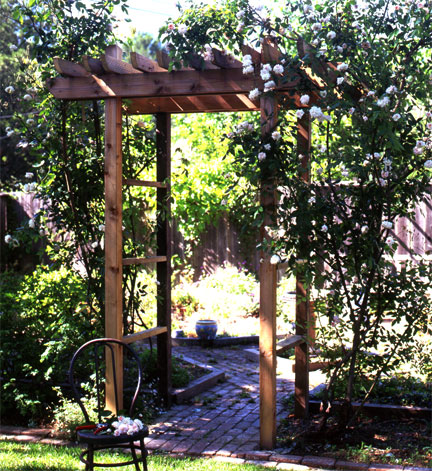 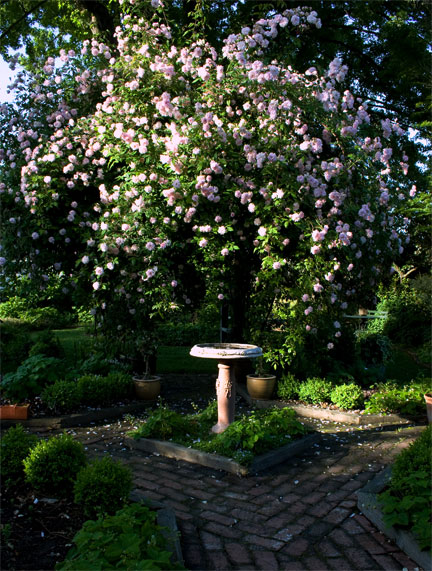 'Climbing Cecile Brunner' will always be my photo muse along with all the other roses in my garden that get to display themselves on structures. This one remains kind of special though because it’s not connected to a fence. Standing free, the structure and the rose become a focal point, a destination, and a backdrop. The arch makes a unique and impressive statement on all four points of the compass.

The photo above shows the northern exposure in early morning. My daughter Anna gave me the bird bath in the parterre’s center. Its design is a bit more feminine than I would choose now, but it really goes with the rose. 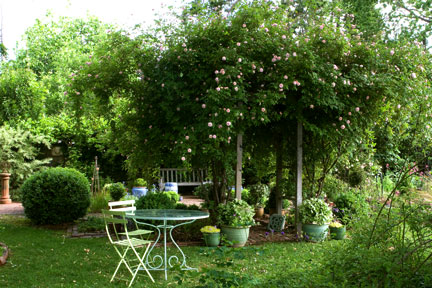 This is the opposite side of the photo above. Can you see the bench? 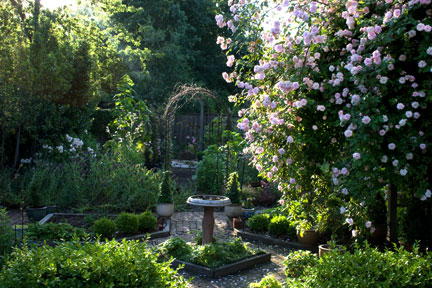 Symmetry thrills me. I learned about the concept of designing with an axis reading gardening books. This picture gives an idea of my own little axis. In this early morning shot, which faces east, you can see that the birdbath is the center of the axis. Behind me  (the photographer) there is a gate to the side garden. The arch you see in the distance is actually a set of three arches forming a tunnel of clematis (they’re not in bloom yet). The bench (which is to the left and out of the picture), and its view through 'Cecile Brunner' to the rest of the garden, forms the axial cross. 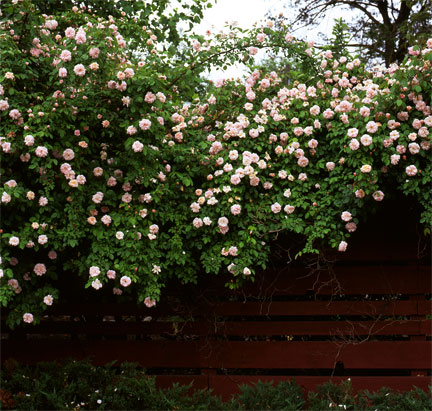 For a different take, here’s a picture of my neighbor’s CB. It’s just a stone’s throw from mine, and nice to see another use for a big climber.

‘Climbing Cecile Brunner’ is pretty much a once bloomer and it has serious sharp thorns. Did you know that it’s actually a sport of a much smaller shrub? The shrub form even reblooms, and does not grow out of control. Take your pick. 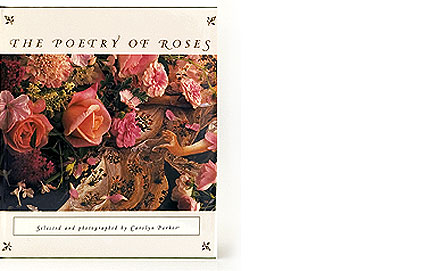 If you’d like a fresh, signed copy of my first book, The Poetry of Roses, send me an email. It’s $25.00, plus shipping. The book, published in 1995, is out of print now. It's embarassing, but I should let you know that copies are available on the internet for as little as .89. I took all the photos in the book in our house and garden, and culled poetry from the world – most every poet has written about roses.

And One More Thing

'Climbing Cecile Brunner' is the C in my rose alphabet featured in my other book R is for Rose. 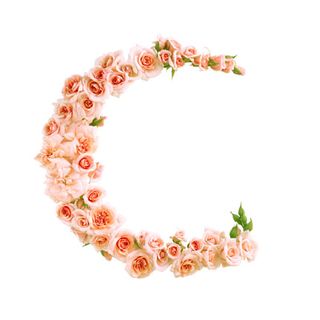