Rose of the Week – 'Madame Hardy' 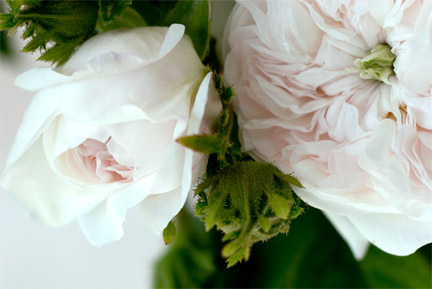 “Belle of the Ball," “Prettiest Girl in the Room (vase),” “Scene Stealer,” “Everyone’s Favorite” – all apply to ‘Madame Hardy’. Graham Thomas writes, “This variety is still unsurpassed by any rose.” 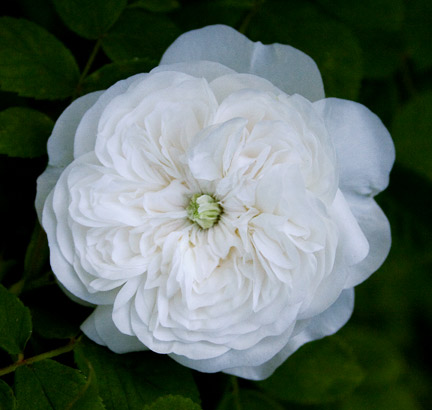 Thomas mentions the bloom's perfect shape and goes on about "just a suspicion of flesh pink in the half-open buds, emerging from their long calyces, and the flowers open cupped, rapidly becoming flat, the outer petals reflexing in a most beautiful manner, leaving the center almost concave, of pure white, with a small green eye." 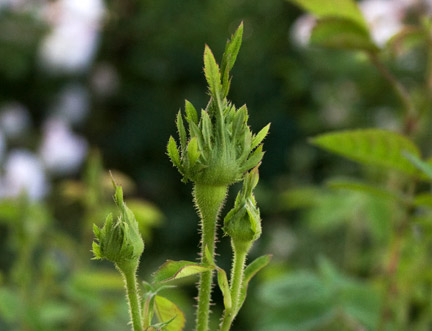 Elaborate frilled buds almost always appear in threes. I've found that once the leader blooms, the two side blooms don't mature into flowers anywhere near as showy as the first, even when deadheaded. I used to think this was a loss – but that's conventional thinking – the buds are a wonderful decorative feature, especially in arrangements. I haven't tried pinching out the leader to force a pair of blooms. 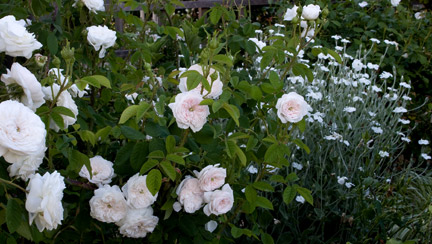 The shrub tends to be willowy or even lanky, throwing up tall new canes just as it begins to bloom. The beautiful light green leaves are dry and papery. That may sound strange – I don't know another way to describe them. 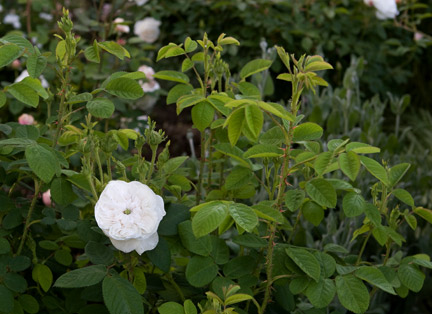 After last year's bloom I decided to sacrifice the long canes as greenery for arrangements – they are spectacular as a filler. I was tired of the loops and cut the shrub down to less than three feet – another way to keep it neat. In some parts of my garden, I don't have room for runaway roses. 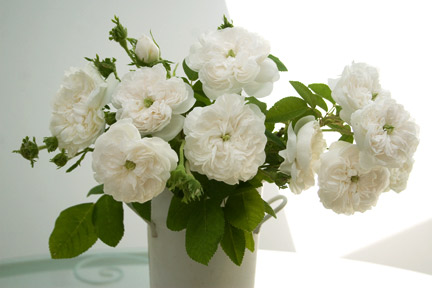 The result was armloads of heathly blooms that I was able to take to The Celebration of Old Roses. White sweet peas were blooming at the time and I used them as a filler . 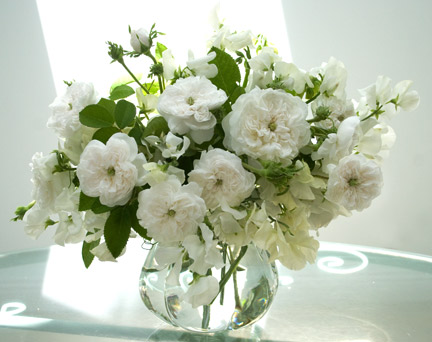 It turned out so nice I mourned the thought that I hadn't taken a picture – I thought I'd harvested all the blooms. But no, a few days later there were more sweet peas, plus the little white bucket of blooms shown above.

In this arrangement, the sweet peas went in first and pretty much filled the vase, the MH stems, with most leaves removed, were then easy to place into the fragrant pillow of sweet peas. 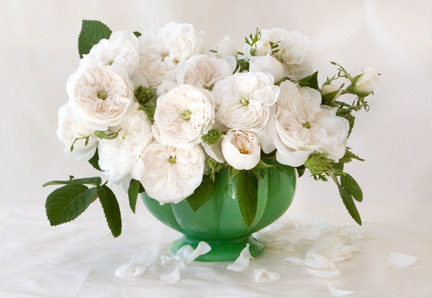 Here she is all by herself – not too shabby. An interesting thing about the blooms is that they tend to just naturally face forward in a bouquet – all those sweet green eyes! 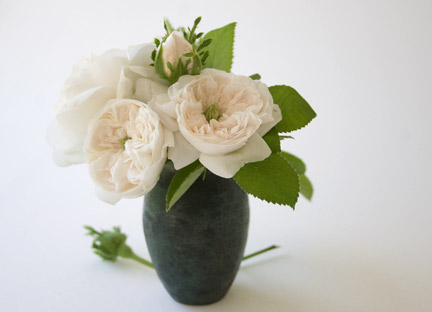 Lately I'm enamored with roses in this small bronze vase. It sits on my computer desk, and came from my favorite florist .

Rose of the Week – 'Rouletii' 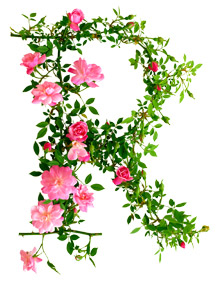 Without this perky rose, my second book would never have come to be. ‘Rouletii’ (also known as ‘Pompon de Paris’) inspired an entire rose alphabet, which then became the basis of my book, R is for Rose.

In 1989, I purchased the little guy in a gallon can from Vintage Gardens, at The Celebration of Old Roses. In those days I didn’t research a rose's growth habit. I just assumed it was a mini, since it had such tiny leaves and flowers. I planted the rose against a fence near a gateway to our back garden. When twelve-foot canes erupted, of course  I was shocked, but also thrilled, because the canes would form an arch over the entrance. ‘Rouletii’ is one of the first roses to bloom in early spring. One morning, as I admired the swooping canes, fully clothed with blooms all the way to their tips, a thought passed through my mind. Make an R for the word Rose. Hmmmm----------oh----------my mind raced. Yes, I could form an oversized R, photograph it, scan it, and then use it as a decorative cap with typography. My life was all about roses, surely I needed a rosy R.

The rest is history. The letter turned out great, and when I saw its photo it dawned on me that the R was ‘Rouletii’s’ initial! I immediately wanted to make another letter. Thank goodness 'Lady Banks' was also blooming. I made a B. Next came the entire alphabet, but that’s another story. Let’s get on to the arrangements. 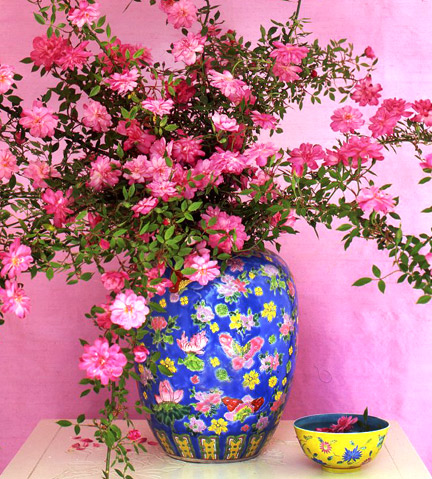 I assumed 'Rouletii' was difficult to arrange when it was time to take this picture for my book. The canes are long and quite prickly. This was an awkward attempt, but the vase, not the rose, was the problem. 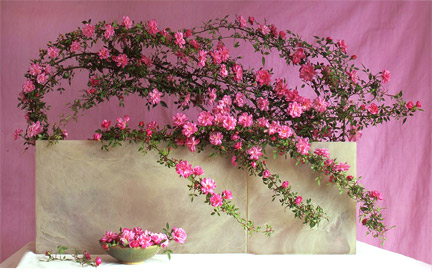 Working occasionally with Martha Sturdy's resin vases (their breadth is about 5-inches) made me think I should give arranging 'Rouletii' another try. I wanted to see if I could contain both ends of the canes in long arcs. You can see that I added two vases together to maximize cane length. This arrangement was world's easier to put together, and it highlights the unique style of the blooming canes. 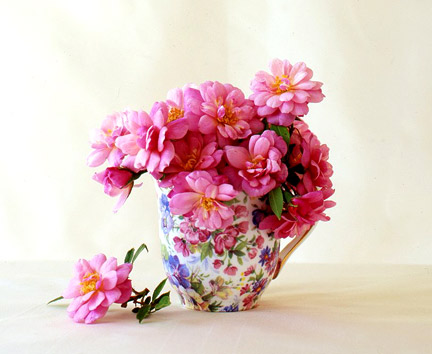 Small roses on big shrubs offer both grand and humble possibilities for arranging. This is one of my Mother's demitasse cups. If you wanted to give something like this as a gift, it would be good to tie the stems together. 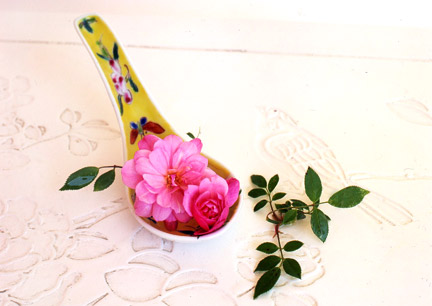 Smaller yet, but how cheery! 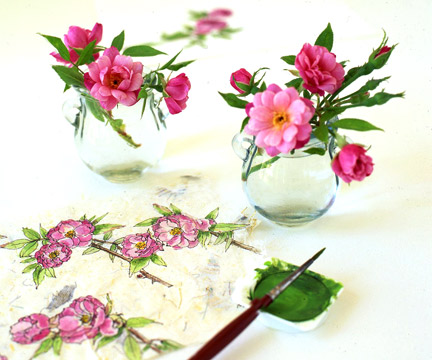 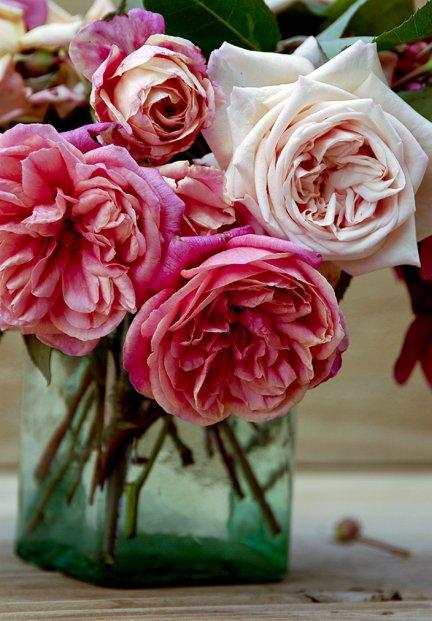 Kauri Creek Bouquet– the light rose is 'Baronne Henriette de Snoy', the other is most likely  'Archduc Joseph' photographed by Jocelen Janon.

When I saw this photo on Jocelen Janon’s Facebook page, it made my head spin with even more love for Tea Roses. The picture also reminded me of how much I look forward to studying the roses gathered each year at The Celebration of Old Roses. Eight-foot tables display collections from each rose family – Gallicas, Damasks, Albas, Centifolias, Mosses, Chinas, Portlands, Hybrid Perpetuals, Teas, and many more are poised to be passionately observed. It’s a unique opportunity to see the special characteristics particular to each group. It’s also a great time to compile your wish list.

At the 2007 Celebration, I was newly infatuated with Tea roses, and had a wonderful time  choosing the roses I wanted in my garden. Since my Teas are small, and I don't have that many photos, I asked Jocelen if he would like to share his Tea images and be this post's guest photographer. He generously agreed. 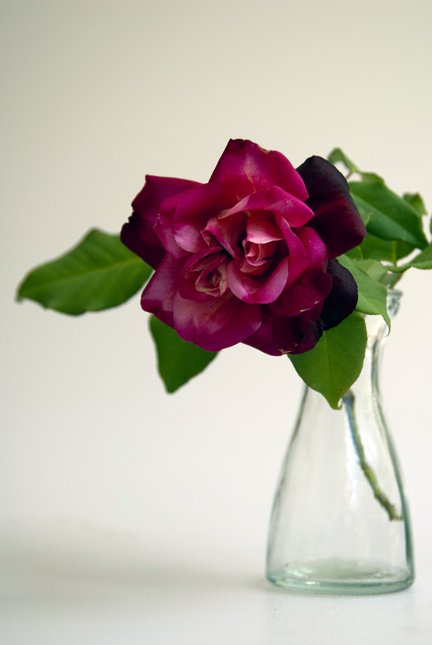 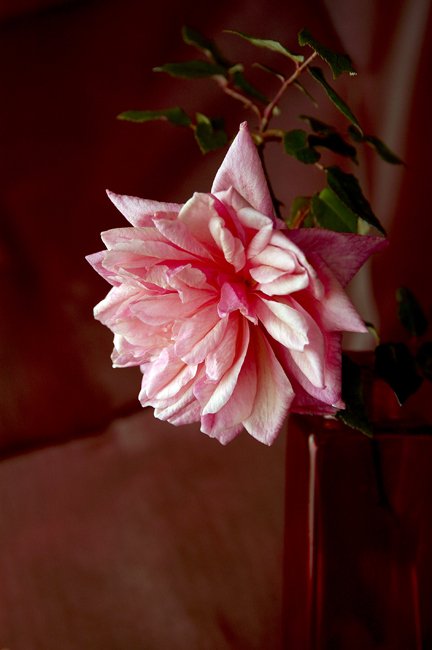 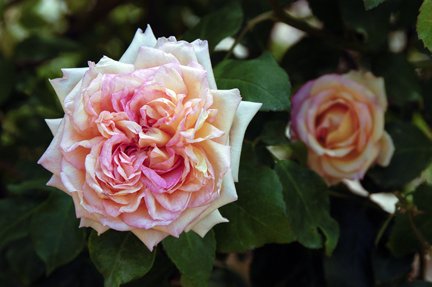 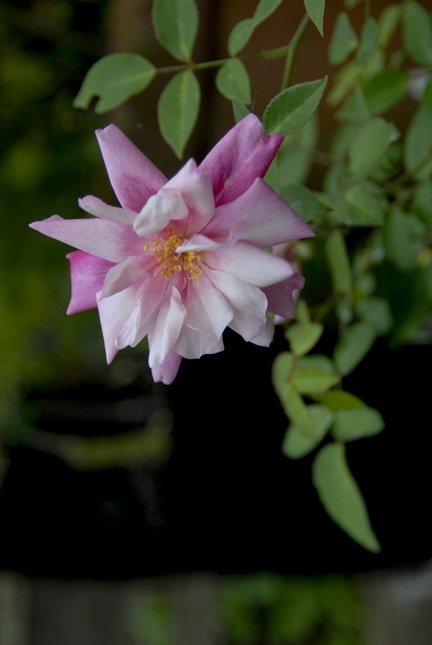 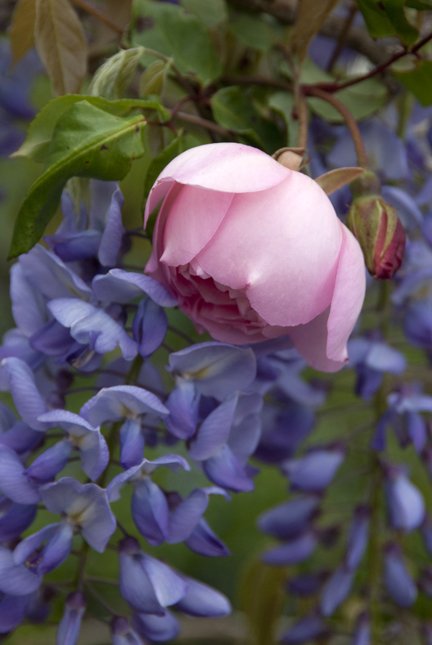 Jocelen Janon was born in France, and has lived in New Zealand for the last six years. He has a fine arts degree and began his photography career with architecture and events, and now includes horticulture and food. He was a contributor to the recently published Australian book, ‘Tea Roses: Old Roses for Warm Climates.’