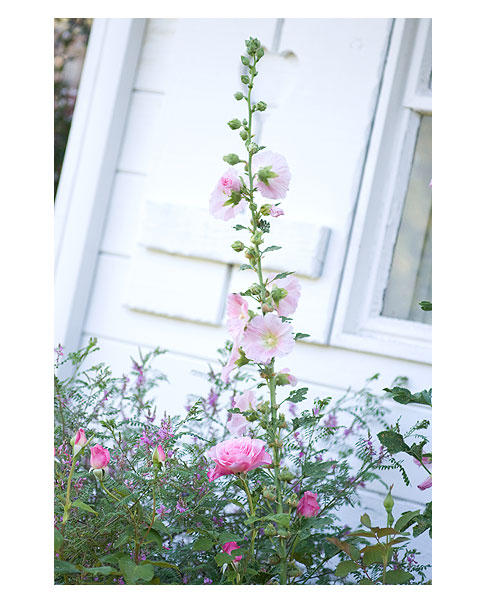 Zest is the secret of all beauty. There is no beauty that is attractive without zest. 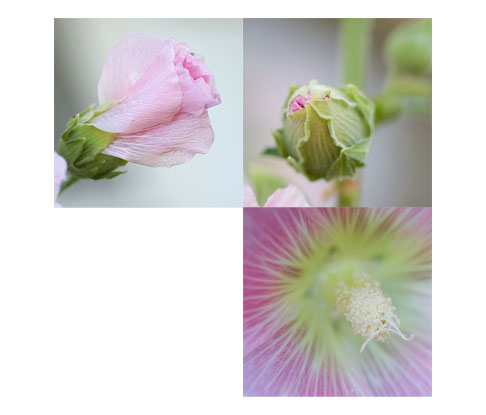 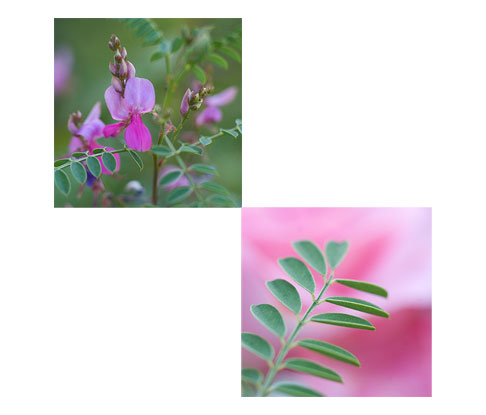 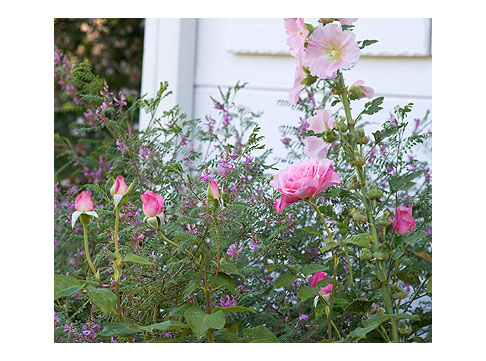 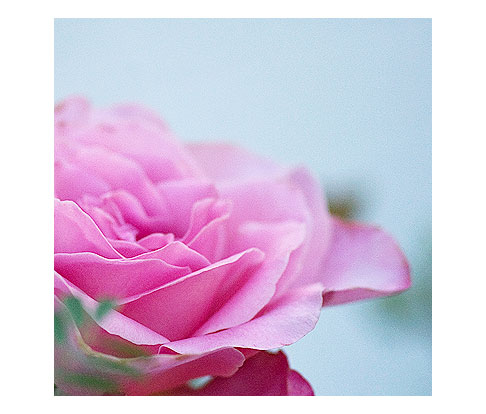 Such a pleasant diversion to be cornered by a hollyhock when I should have been watering.

I'd been waiting for the Sweet Surrender roses to bloom at Hollyhock level-- crossing my fingers that the hollyhock blooms wouldn't be too high for a picture. I've also been waiting for some years for this plant combo to kick into maturity. The pea flowers are indigofera. The hollyhock is Alcea ficifolia from Annie's Annuals. 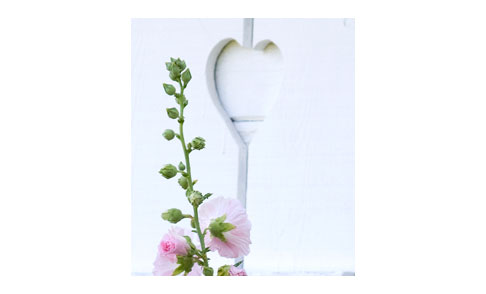 It takes time to nurse a 4" potted hollyhock into maturity– they  definitely prefer germinating in the ground. After two years this one now has two stalks and there's a 2-ft seedling nearby. YAY ! 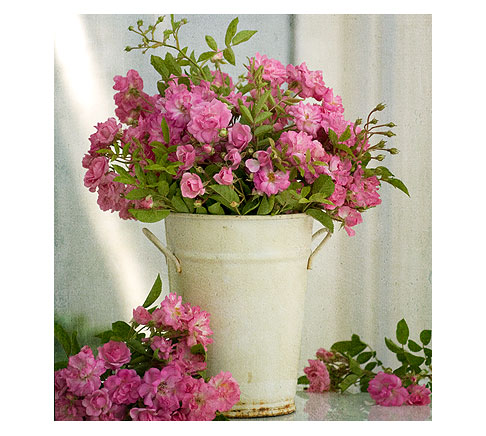 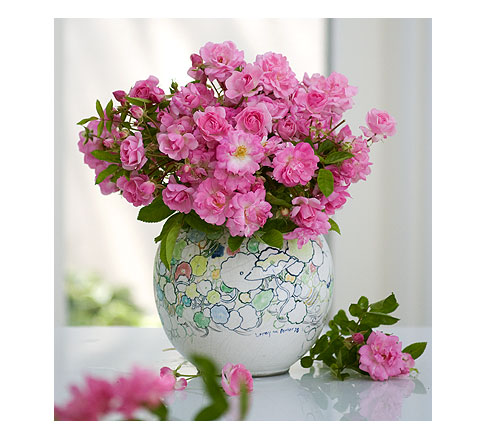 Then the first vase-- how do they look in this one? 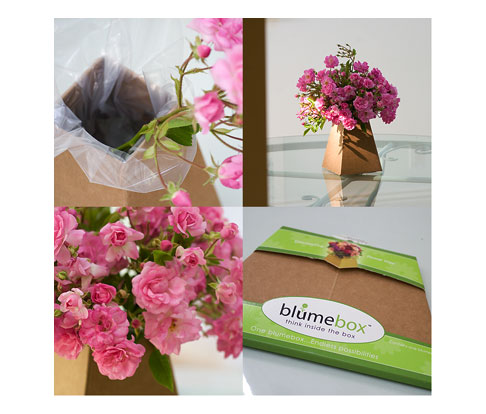 Hmm, what else can I use? How about that blumebox. 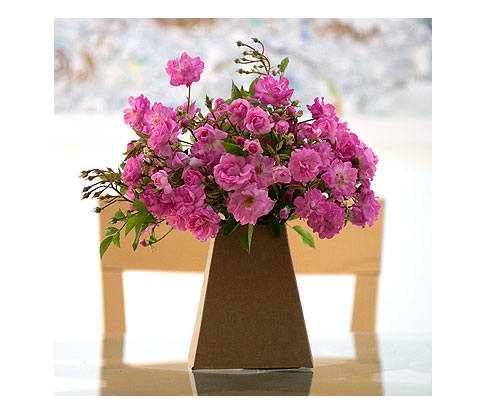 Perfect shape-- yes perfect-- easy-- chic-- roses love it-- it loves roses-- I'd even like one in glass or porcelain.

After these darling roses were in the house for a while, they began opening perfectly (that word again). The photographer didn't nudge any of these blooms into their smiles. As I was harvesting it was a challenge to find the blooms looking like this. I guess they needed a little 'inside' air and protection. And they stayed fresh for days. 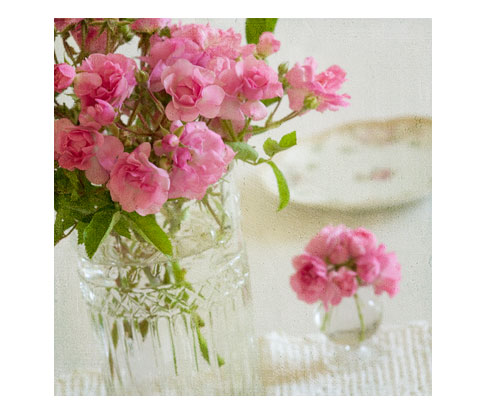 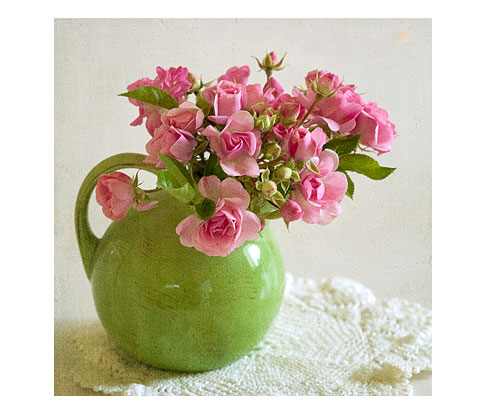 I think the last two images would especially please Peggy Martin–– their inspiration.

Peggy Martin and Her Rose 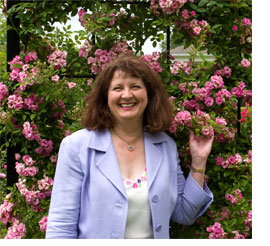 Two summers ago I had the pleasure of photographing Peggy Martin in front of her namesake rose. This image was taken in the beautiful Louisiana garden of Marilyn Wellan.

I was a newspaper columnist at the time and wrote a piece about my trip, that I'm excerpting here.

Picture four women at a garden party, seated in a group of chairs on a long veranda– we faced a broad allee of velvety grass, framed by deep beds of Tea, China, and Polyantha roses.

Peggy told us the story of how her home and garden of more than 400 roses were completely decimated by Hurricane Katrina. Her Plaquemines Parish property was under saltwater for two weeks — everything died. 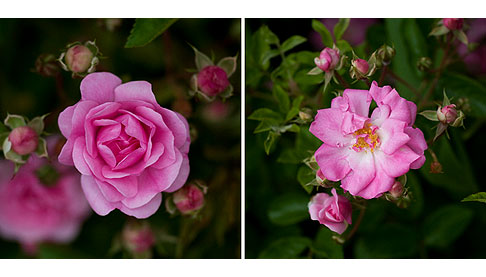 She returned to denuded trees, black sticks and gray mud; a scene that reminded her of the devastation at Hiroshima after the atomic blast.

As she walked the property, she noticed a leafy spot of green on an old shed that had been covered in rambling roses. It was the only living thing, and it appeared to be thriving. She soon realized it was the bright pink rose she had received as a cutting from an elderly lady who told her the rose was Seven Sisters.

Once Peggy grew the rose, she soon realized it was not Seven Sisters. She spent a good deal of time, to no avail, trying to find its identity. She told rose expert Dr. Bill Welch about the lone survivor. He was so impressed that he named the rose after Peggy and asked her if she would consent to featuring it in a garden restoration project for the Gulf South.

Peggy sent cuttings to rose nurseries, and now thousands of dollars have been raised to benefit replanting public spaces in Louisiana, Mississippi, and Texas.

PEGGY MARTIN IN MY GARDEN 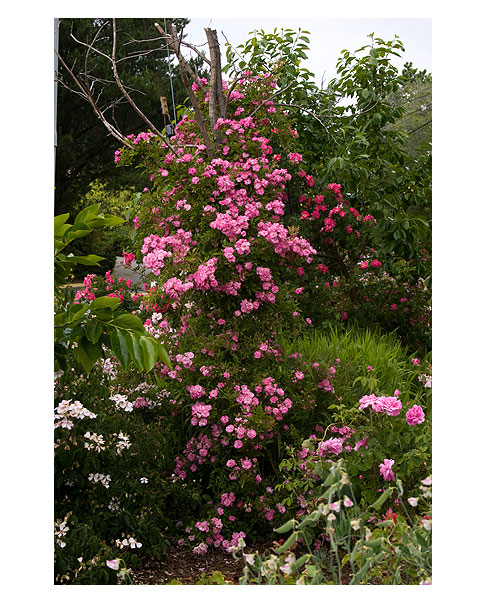 When Marilyn and I visited Peggy's new home and garden in Gonzalez, La, she gave me a rooted cutting of her rose. Here it is, only two years later, thriving in my California garden. 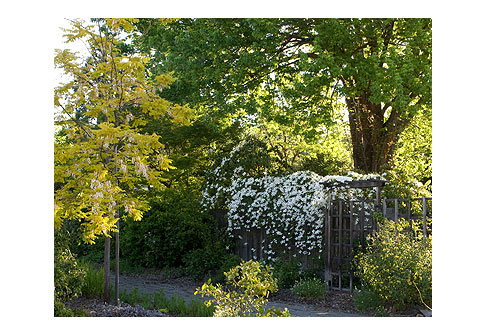 My Peggy Martin rose is climbing a Robinia 'Freesia' that was killed during sewer work on our property. The yellow tree (above left before it died) was so lovely I didn't want to remove it, and hoped a climber or rambler would come along and give it new life. 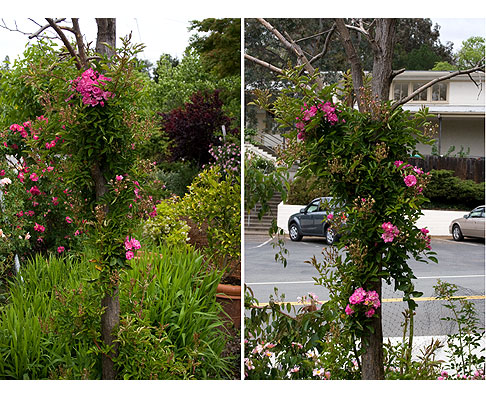 By now many of you photographers know I like to show pairings of good-and-not-so-good background shots. This set was taken a year ago. The school parking lot across the street is pretty startling isn't it? Would you know it was even there-- did you think I might have acres and acres of roses? 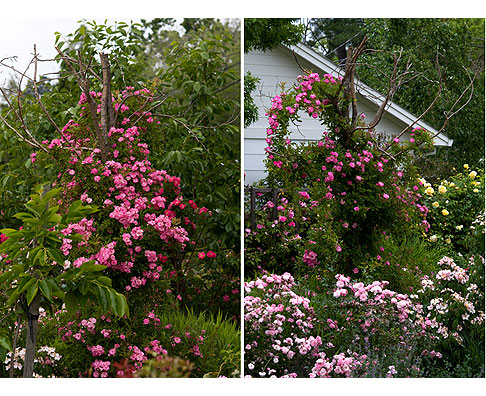 In this year's version, I turned with my back to the parking lot and shot the house. In both shrub views (to the left in each set) the camera is facing north.

To order a Peggy Martin rose for your own garden, contact one of the nurseries below: 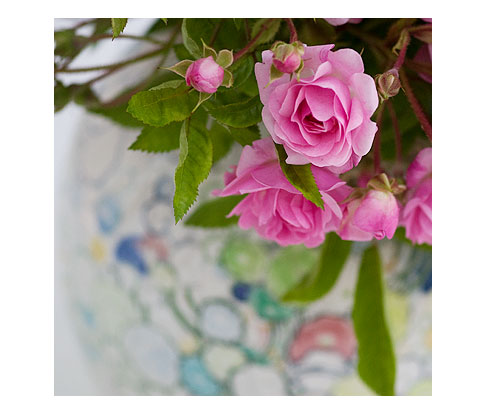