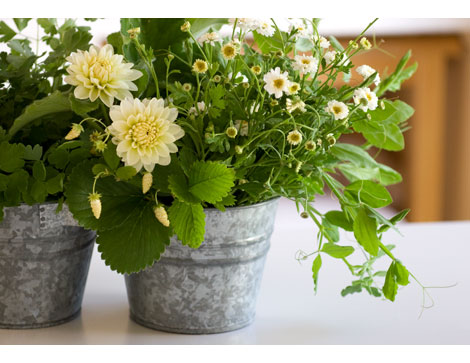 Ritual is necessary for us to know anything.

Gathering garden treasures to pass on in poseys or small bouquets has become a rather glorious ritual for me. A well-stocked garden has much to offer-- surprises included.

Roses display especially well when laced and frilled with greenery-- the more herbaceous the better.

1 Do you recognize these leaves? Yes, they belong to aquilegia (columbine)-- a shearing of fresh new leaves only makes the plant stronger, and they are long lasting in a vase.

2 Peppermint-scented and fuzzy-leafed, Pelargonium tomentosum is definitely a favorite. I have two plants that I've been harvesting all through the season. These do best in partial shade.

3 Geranium pyrenaicum 'Bill Wallis', is a surprise filler from Annie's Annuals. The perfectly round leaves on long stems are ideal, and striking with roses.

4 White strawberry leaves have served me well all through the season too. Fall has brought a new crop of berries, which are a particular delight to bouquet recipients.

5 Sweet pea leaves and tendrils are wonderful curling through the roses. In the garden, these have reseeded in unwanted places-- a free October harvest that will probably result in ultra-strong plants. 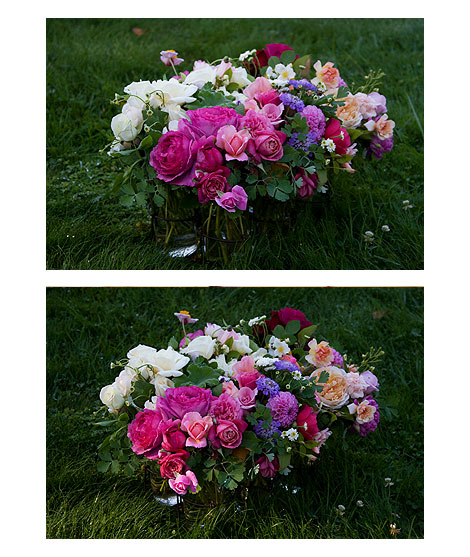 The featured greens join multi-colored roses in six bouquets. I originally thought to show both images, because the sun played hide and seek while shooting. The different effects don't really show up here though. I'm including both anyway. 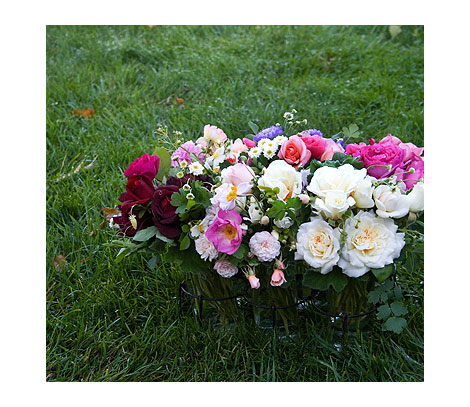 I usually end up doing a color story with the available roses. There were just enough for one all white bouquet. 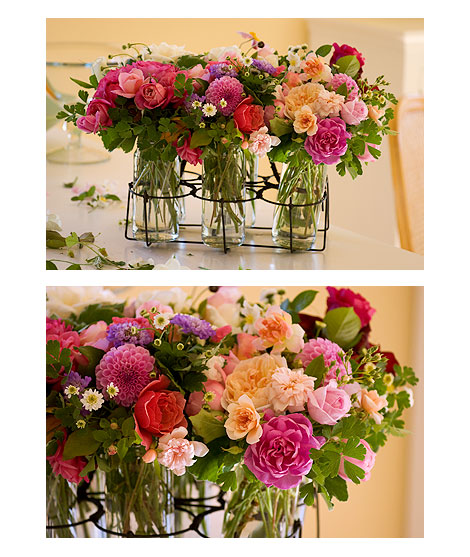 In an Autumun Rose Garden 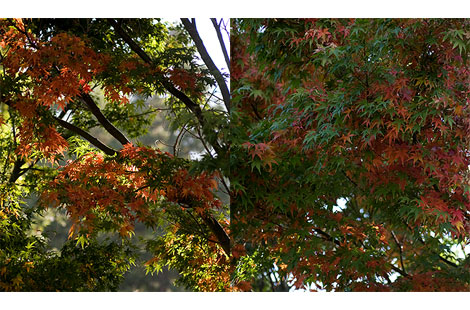 Poking around blogdom recently led from one firey leaf to another. I couldn't relate until I saw a bit of a blaze on one of our Japanese maples. Indeed fall is here, but in many ways it's another season of growth, but also one of rememberance, and taking stock of the garden's year. Today, from 9:28 to 9:54 a.m., I recorded pictures and my thought stream: 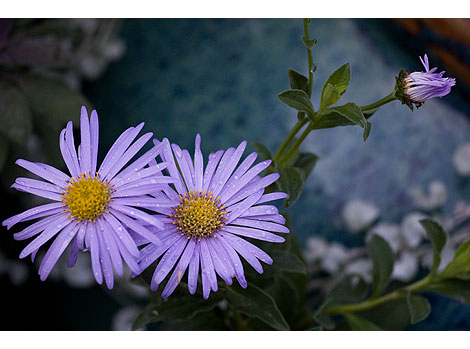 Gratitude to B. Worl for turning me on to asters-- they will have their say a year from now. 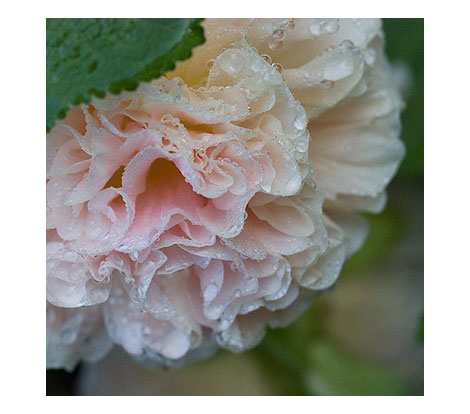 After years of single hollyhocks, a ruffled skirt finally made it into the rose beds. 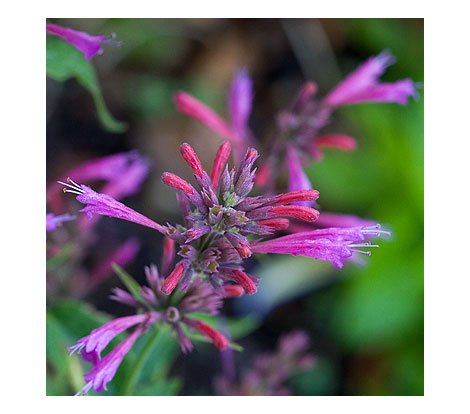 I'm glad Mary made me buy this agastache-- I hope it takes off. 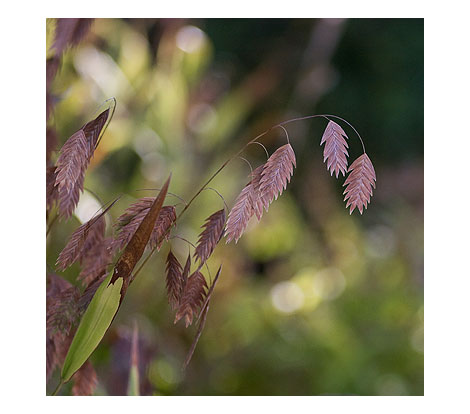 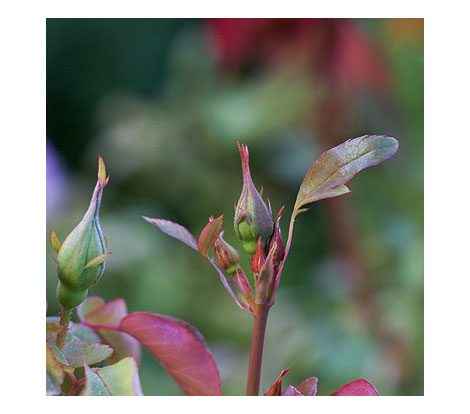 Tea Roses are finally getting it on. 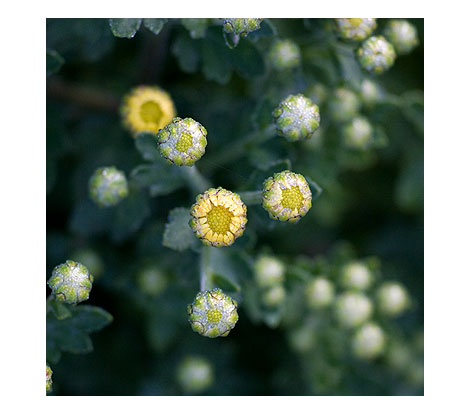 Mum watch-- will they open by Saturday? 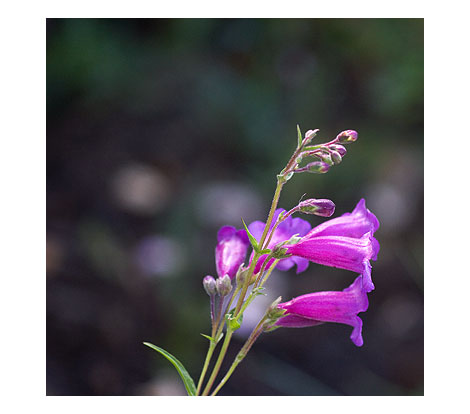 Pennstemon still coming to the party. 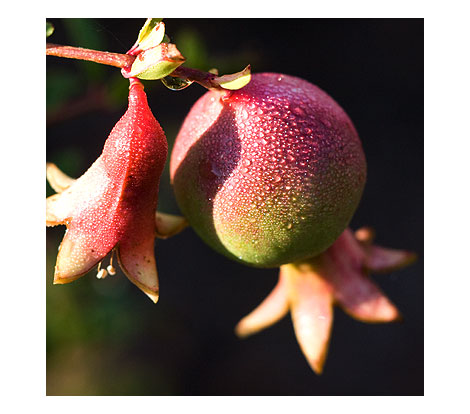 Move this grey to a better spot. 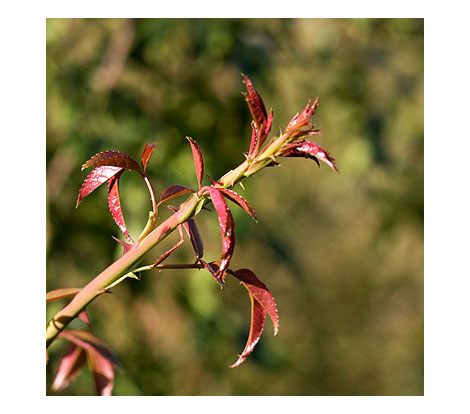 Some rose canes are already thrusting toward spring. 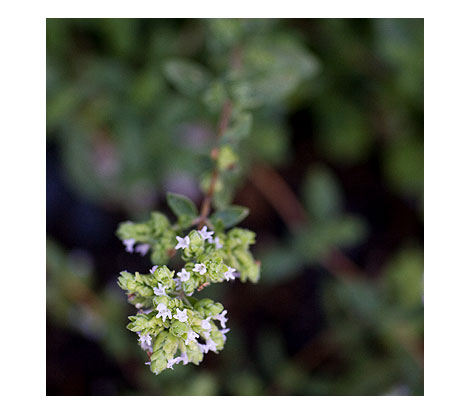 Glad oregano is back in the garden. I could have made this post twice as long, and once-a-day for the next weeeeeek . . . 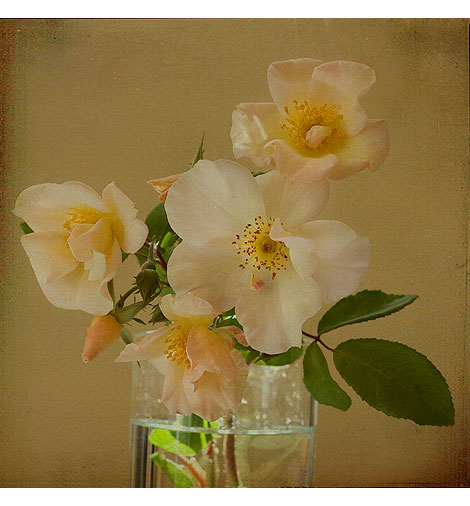 You don't love someone for their looks, or their clothes, or for their fancy car, but because they sing a song only you can hear. 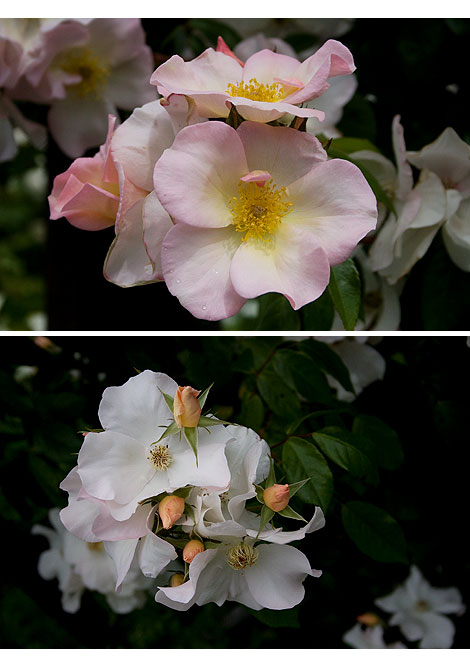 Sally sings three different songs when it comes to blooming, and until recently I only heard the first one. Pink petals and fresh stamens were all I cared about, until the image, above, challenged me. How could I not appreciate this second stage? Those graceful turned-in stamens, undulating petals, peachy buds soon to open . . . In the third, fully open stage, she's all white-- also very nice-- especially from a distance. 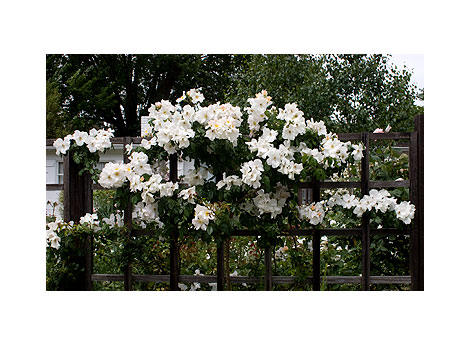 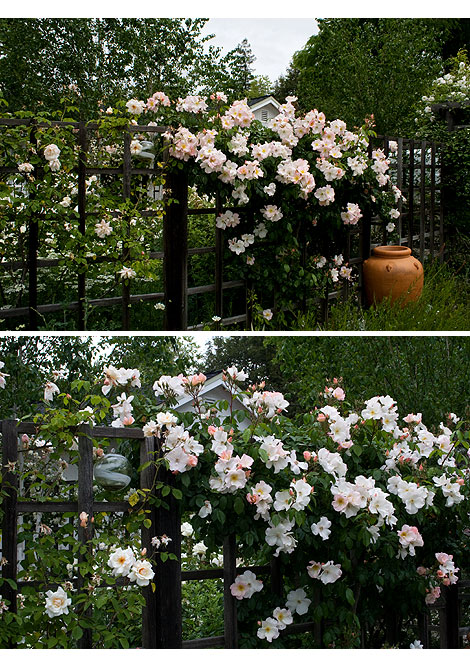 One rose expert says you can't train Sally. Well I beg to differ. If the laterals are cut off when bloomed out, the rose stays shapely, and new blooming laterals get a quick start. 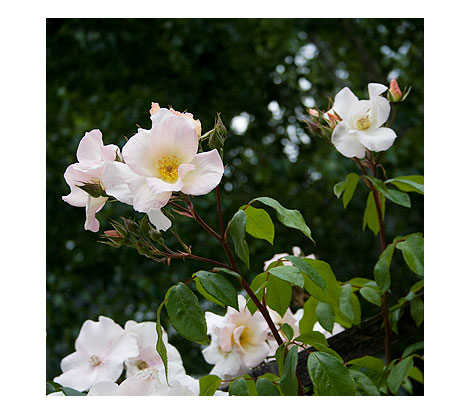 The laterals, shown above, can be one-foot to much longer. Yesterday, I pruned a Sally, growing in the shade, in a client's garden-- the laterals were four-feet! Sally Holmes does really well in shade and remarkably never has mildew. 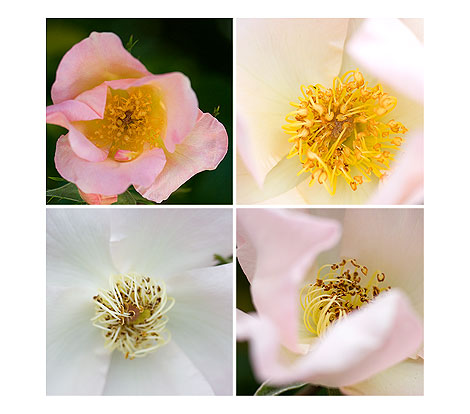 As I started this post, I wondered who Sally was named after, since she really is an extraordinary rose, and wonderful landscape presence. Sally was the wife of her hybridizer, Robert A. Holmes, who introduced her in the UK, in 1976. She is a cross between Ballerina and Ivory Fashion. If you know those two roses, the results were definitely spectacualar and, I'd say, surprising.

I've seen a hedge of Sally 10' high x 100' long. She's also a stand-alone shrub pruned to whatever dimensions you desire. From here, controlled-on-the-fence suits Sally and me just fine.

I think Sally must be easy to propagate this is one that I started from an 8"stick that, once rooted, matured very quickly. She's been growing on the fence like this for at least seven years.

Let me know how your Sally Holmes grows.