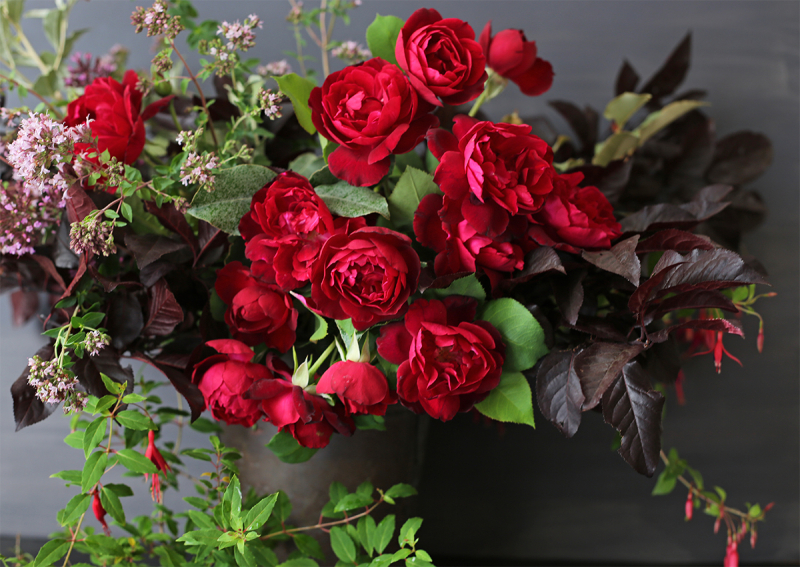 A mere 110 million roses, mostly red, will be sold in the three day period surrounding Valentine's Day! Yes, florist roses can be beautiful, but what about the great red roses in our own gardens? Here are ten that I love in my garden. Maybe they will inspire you, and if you have your own favorites, please share them in comments. Barcelona, above, is arranged with plum leaves, marjoram and fuschia. 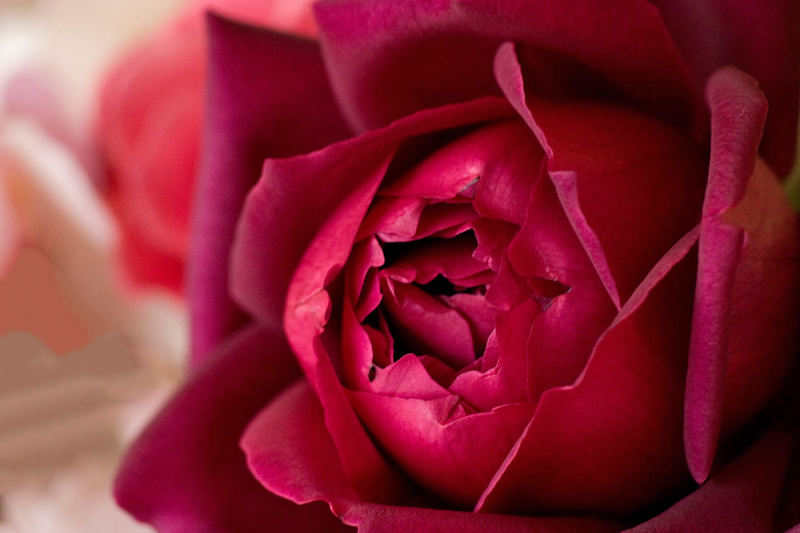 My number one favorite is Oklahoma, not only for its rich red/black coloring, but at each stage of opening it's spectacular, from bud to full open bloom. The one above will have progressed in at least two more stages to finally reveal a cache of burnished gold stamens. 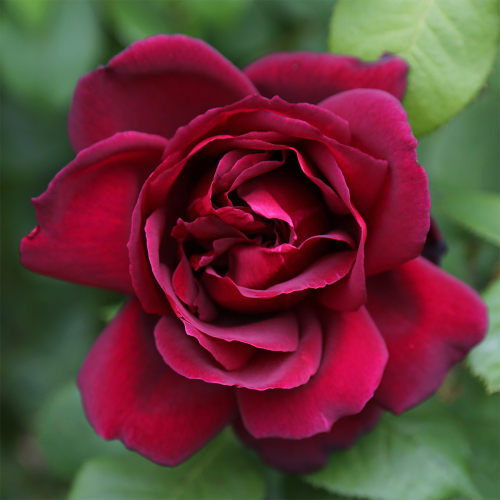 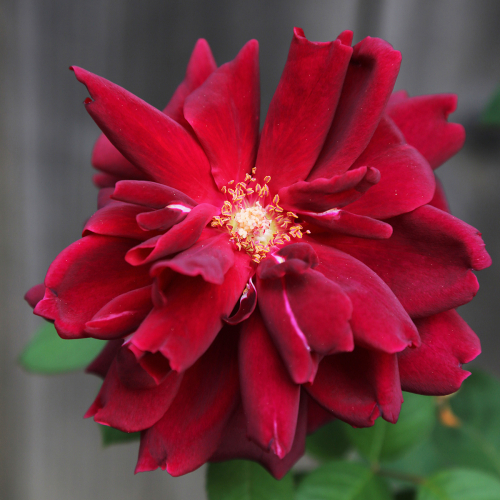 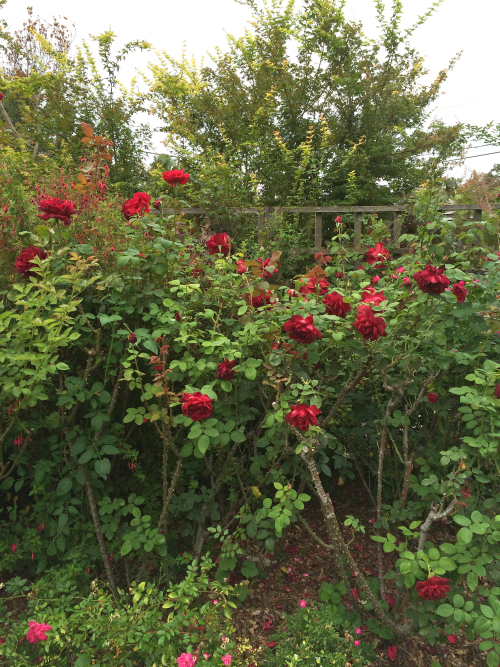 Since my garden is planted in color blocks, all the red roses reside in a rich harmony together. Oklahoma mingles here with Mr. Lincoln–both are tall Hybrid Teas that reach at least six feet. Duet, a Floribunda, couldn't be more dependable and has been giving us her beautiful silver-backed blooms for more than twenty years! 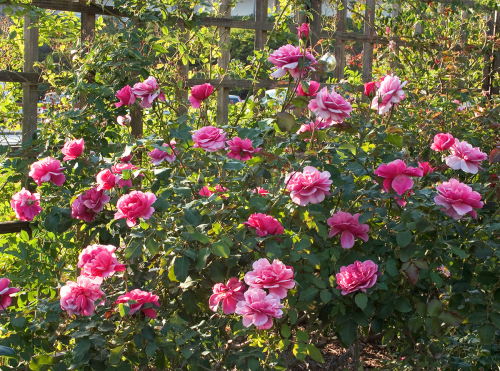 Duet shrubs are in the four foot range for height and width. David Austin reds are well represented with three spectacular beauties that are all excellent growers between five and six feet. That's Tradescant in the center with Falstaff above and The Prince below. 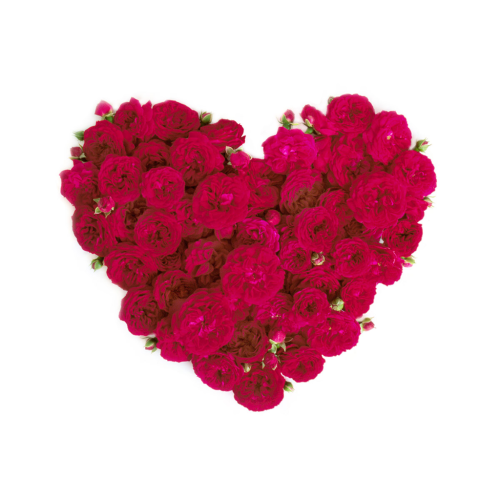 Chevy Chase is just plain fun to have in the garden and a real show stopper. Small blooms form bouquets on a stem that are easy to use in arranging. Try making a Chevy heart and take a phone shot to send next Valentine's day. 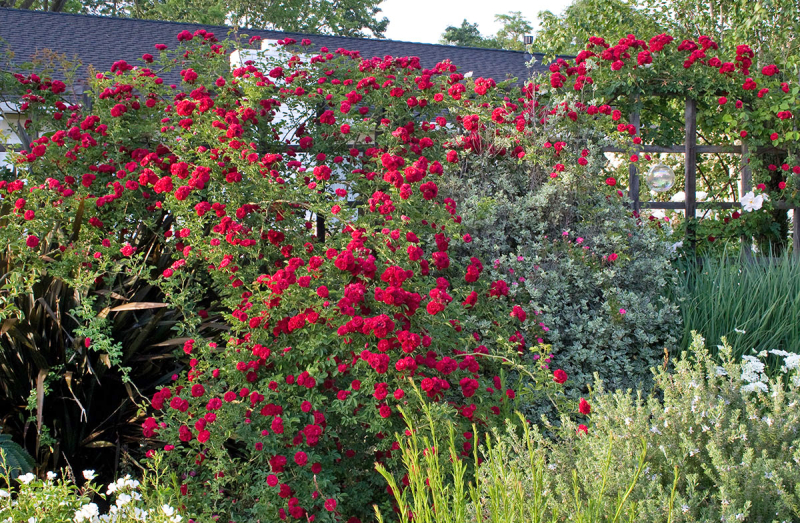 Chevy Chase is a robust, once blooming climber that deer stay away from (it's pretty thorny) in my California garden. On the other side of the fence are the more tender reds, Duet especially, which before the deer fence installation, was always first to get nipped. 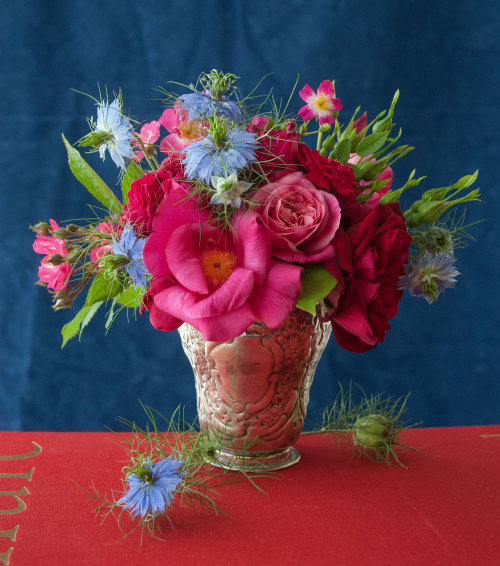 This mixed bouquet has a couple of light red Teas that are outstanding performers. Side by side, in front are Mme Antoine Rébé and Monsieur Tillier. Rébé is in the five to six foot range and Tillier is more like 8'x8', or even more with the right growing conditions. For more about these two take a look at this post. 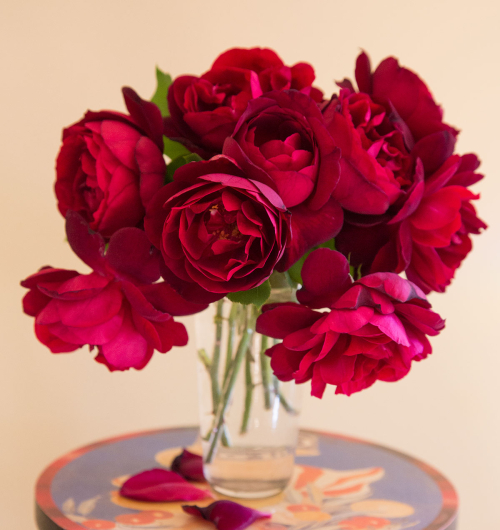 Barcelona, also known as Frances Dubreuil, is from the 30's and is just plain charming–always blooming with coloring that matches Oklahoma, on a light, airy shrub with smaller blooms. 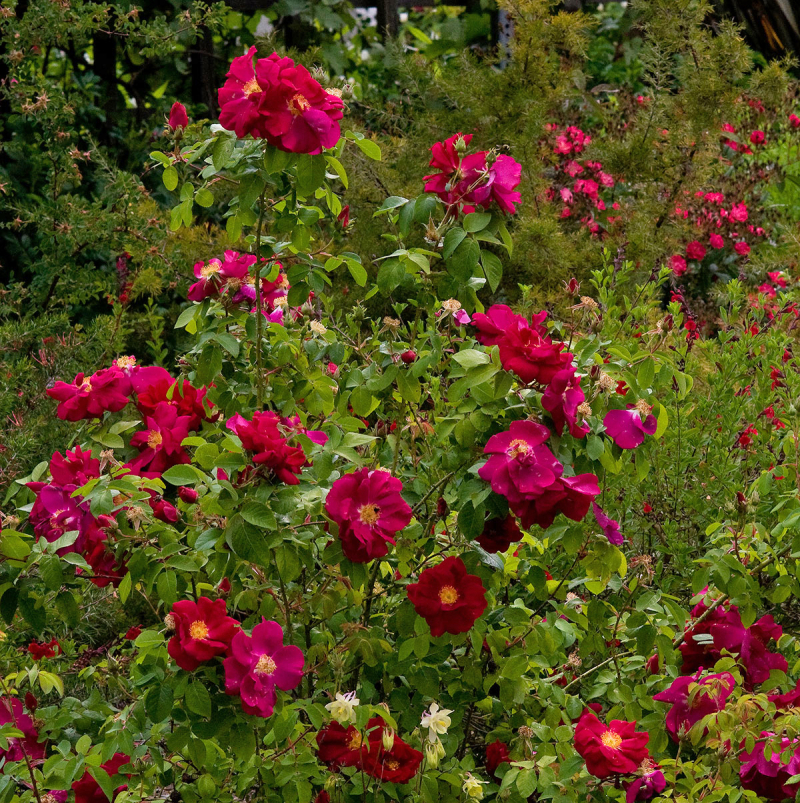 This is one of those roses I was wowed by at a show and just had to have, but of course couldn't find anywhere. Then one day I stood before it in a Sonoma county garden! Easy to propagate–just pull on a cane, and up comes roots and all. This is for the serious connoisseur who has room to spare, for it's a once bloomer that creeps all over the place. I wouldn't be without it though.

To find out more about these roses, which I hope are tempting you, click on the brown links in the text. They are all connected to the invaluable rose info site helpmefind.com. On each rose page at helpmefind there is a "buy from" tab for purchasing sources. Let me know what you think and tell us your favorite red rose. 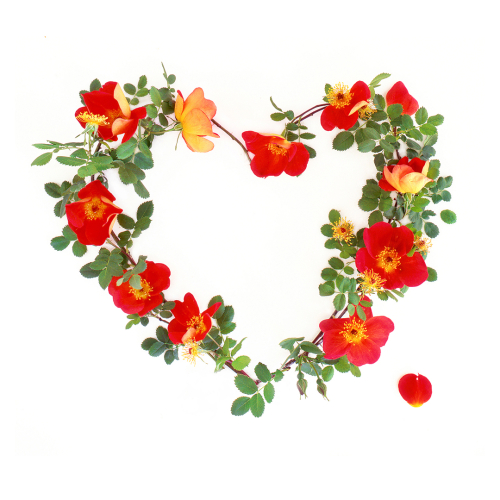 One day more than 400 years ago, creation gave the world of roses a perfect valentine. The gift of the color crimson. It took awhile to establish itself in the gene pool, and did so with the assistance of one yellow rose. 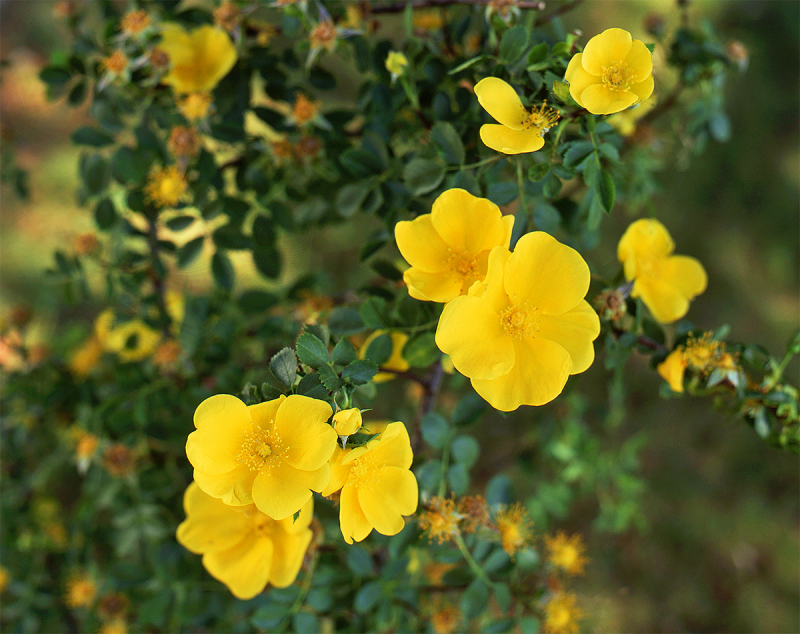 In 1590, there was only one yellow rose on earth and it grew in Persia. Westerners eventually named it Rosa foetida. 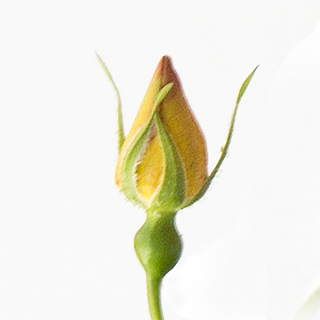 Here is her story.

In a winter garden in ancient Persia, when this yellow rose was dormant and had no leaves, a growth bud surfaced through an eye on one of her brown, slender canes. As the days warmed, the growth bud swelled, and began to lengthen. Shaggy bits of green emerged that soon became small, serrated leaves. When fully leafed out, flower buds appeared, as they did every year. But on this particular cane when the sepals curled back on the rosebuds, instead of the color yellow, tight scrolls of gold emerged with a blush of red. Five petals slowly unfolded and took shape, each one a perfect heart. 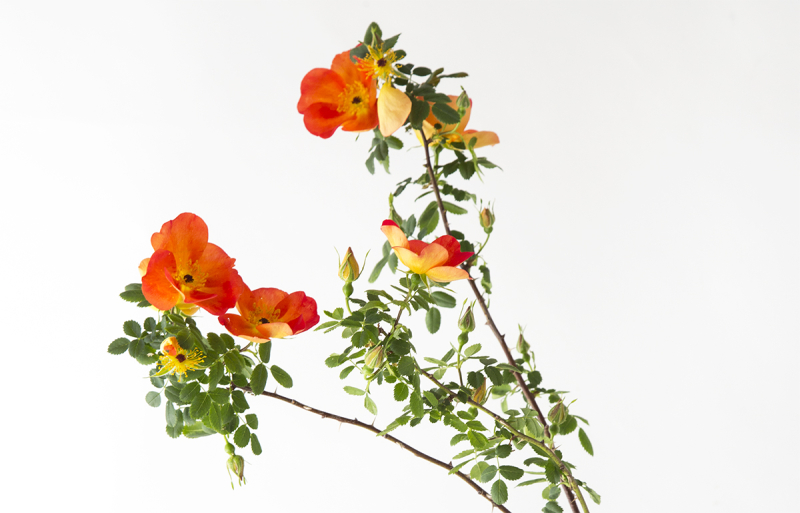 The unexpected gold became the under-lining for cups of glowing crimson. 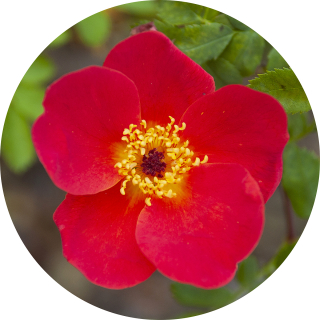 The pistils formed a heart of garnet encircled by stamens of gold. A new rose species was born. 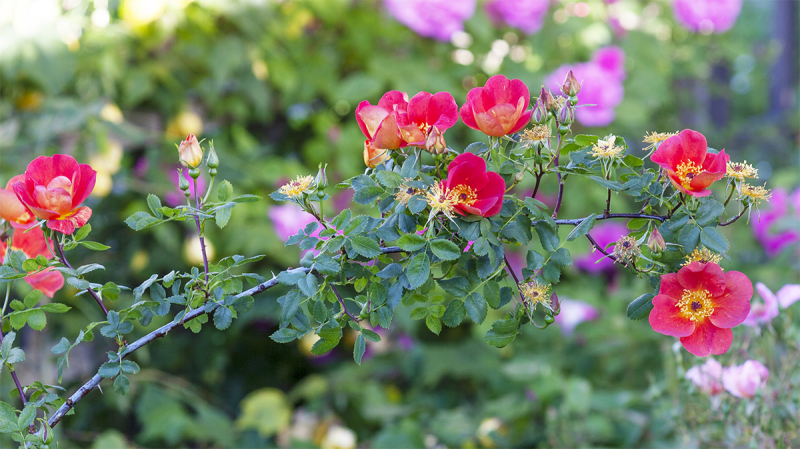 I like to think of the astonished gardener as he noticed the brilliant flowers and eagerly propagated them into shrubs of a new species rose. The rose became known as Doufrouyeh (two faces) and grew in cultivation from Asia Minor to Afghanistan and Eastern Tibet. Don't you think it's remarkable how the original yellow rose with its unique matching stamens, pistils, and petals changed so dramatically? Definitely one of those cosmic/creation miracles. 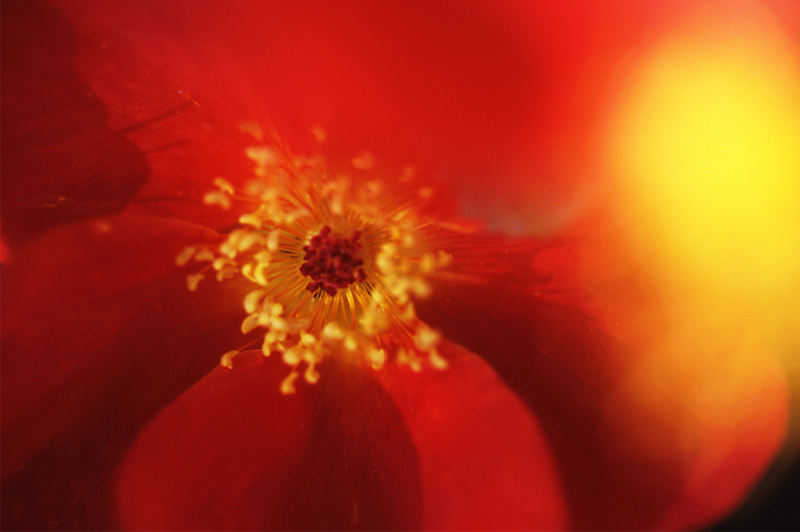 The two foetidas eventually made it to Europe. An unsympathetic fellow named the roses R. foetida and R. foetida bicolor. In Latin, foetida means fetid or "having a bad smell." It seems unjust to name such stunning roses for their scent. Their fragrance is unusual, more pungent than bad. But aside from that, our roses had big time work to do in the West.

CRIMSON IN THE GENE POOL

Since there continued to be few yellow roses, and they only bloomed once, hybridizers, again and again, tried using the two foetidas and the hybrid *Foetida 'Persiana', to make a yellow Hybrid Tea.

*Below is 'Harison's Yellow,' a hybrid similar to Foetida 'Persiana.' (Both of these once blooming roses were created in the west, crossing the two foetidas with other roses.) 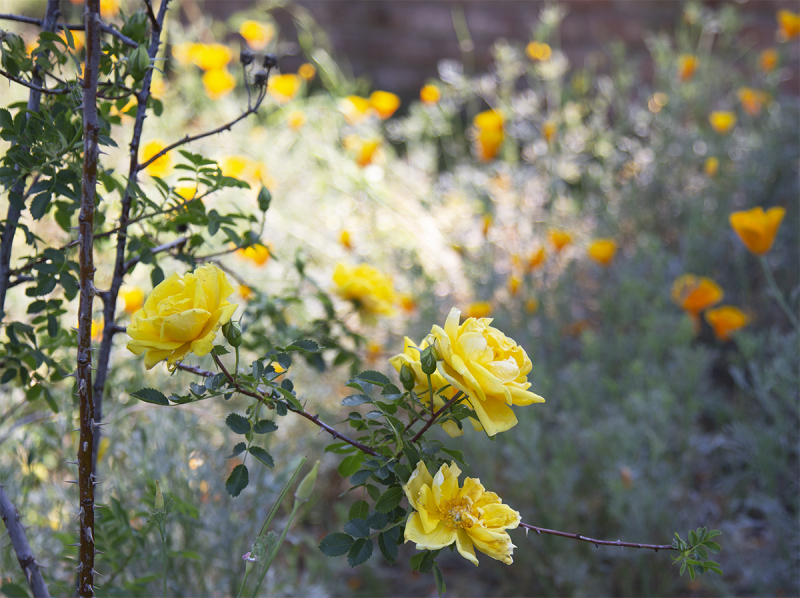 For twenty years, the persistent Frenchman Pernet-Ducher tried to create a reblooming yellow rose without success. Then one day, a visitor in his rose fields pointed out a yellow seedling that must have come from an accidental cross. The plant turned out to possess the genes of a reblooming hybrid! Unknowingly, Pernet-Ducher finally succeeded in creating what is classified as the first yellow Hybrid Tea. He introduced her in 1900 with the name 'Soleil d'Or, meaning "golden sun." 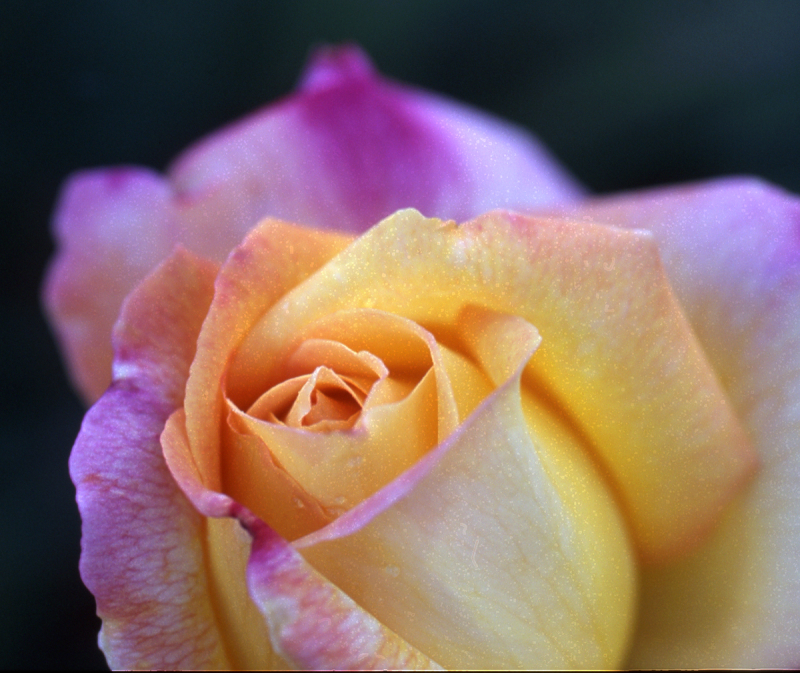 The successful mating of 'Soleil d'Or' brought yellow into the usable gene pool. Now rose breeders would have free reign for unlimited color possibilities. Thanks to the Foetidas, the world has yellow, gold, peach, orange, coral, and multicolored roses, like the famous rose 'Peace' above.

By the way, all these roses have their own special classifications, and are under the umbrella known as "heritage roses".

ON A PERSONAL NOTE

I have not posted here for three years, and I'm so happy to be back with tales about this very special rose. You will be seeing lots more from me. Those of you who are subscribers, please leave a comment, I would love to hear from you and know that you are still here. 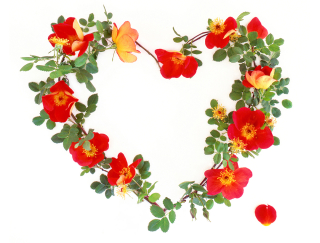 I'm excited to announce that I just opened the Rosenotes Print Shop on etsy. I'm in the process of filling it with endless rose beauty, and this heart image of Foetida Bicolor is offered there as both prints and greeting cards. I do hope you will stop by and maybe even "favorite" the shop if you like it.

Please drop me a line here, at etsy, or on Instagram if you have questions.