Cecile Brunner must be the most popular climbing rose in California. She's readily available at nurseries, and in the Bay Area where I live, glorious mounds fill freeway beds, and long canes grace pergolas in city parks. In neighborhoods you may find her neat and tidy on an arch in the garden, or wantonly devouring garages and sheds. 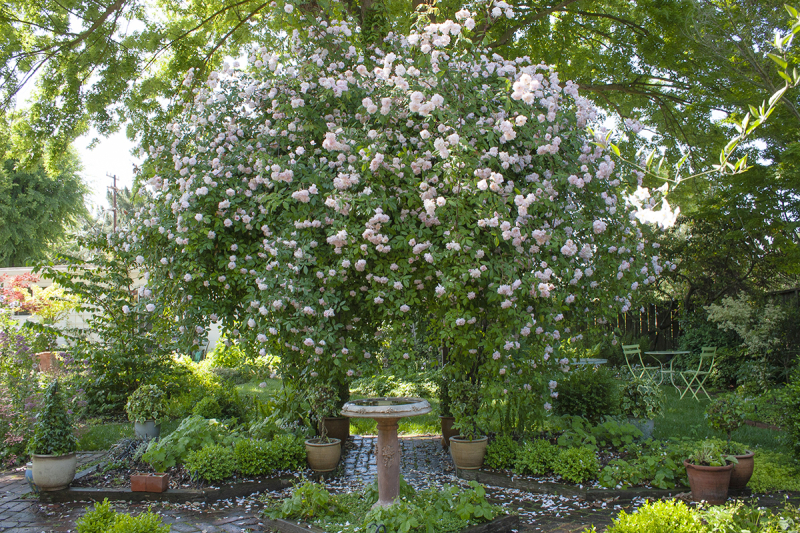 Cecile Brunner is fragrant, flexible, powerful, and ever-changing. The effulgence of a generous heart seems an apt description. Year after year, in my garden, she was a showstopper reflecting the nuances of that year's pruning and the always evolving shade pattern from a huge silver maple overhead. This image is from 2005. 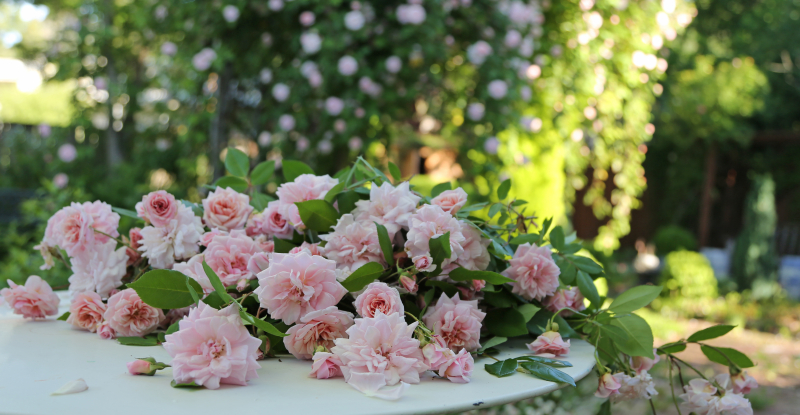 The story begins in 1990 and this gardener's dreams of a gorgeous arch blooming with tiny pink charmers, or as they are fondly known–sweethearts. Two plants purchased in 3-inch band pots took only one year to meet at the top. 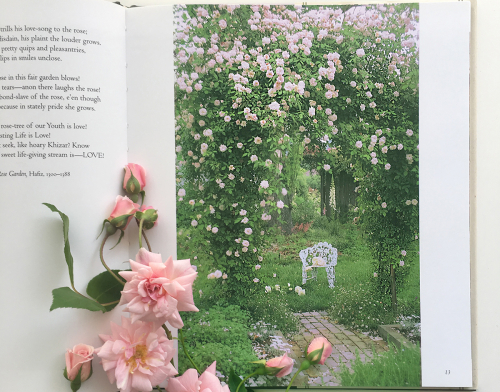 Two years later, the rose appeared mature and resplendent in my first book, The Poetry of Roses. In 1995, the metal arch buckled and had to be propped up by two-by-fours! Four years later, a sturdy pergola, worthy of our Cecile, finally offered years of wonder and joy.

My photo archives are brimming with each year's progress–here are three: the first is from 2014, then comes 2017, and finally 2018. 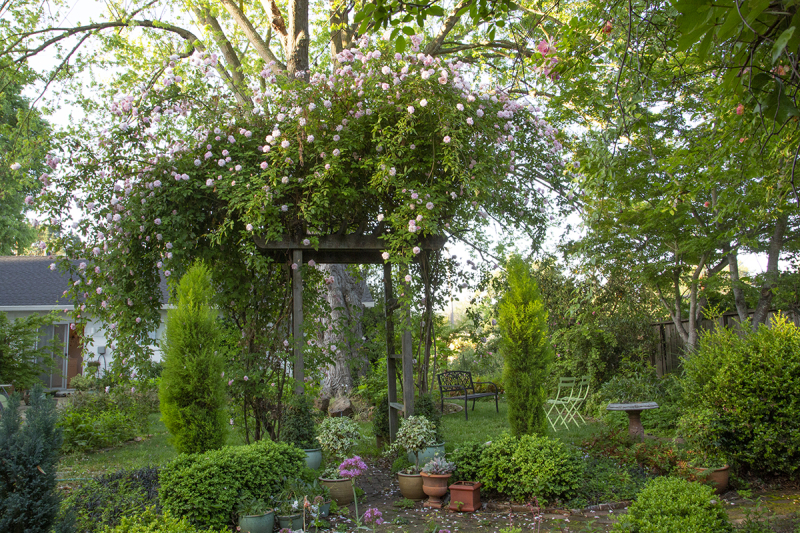 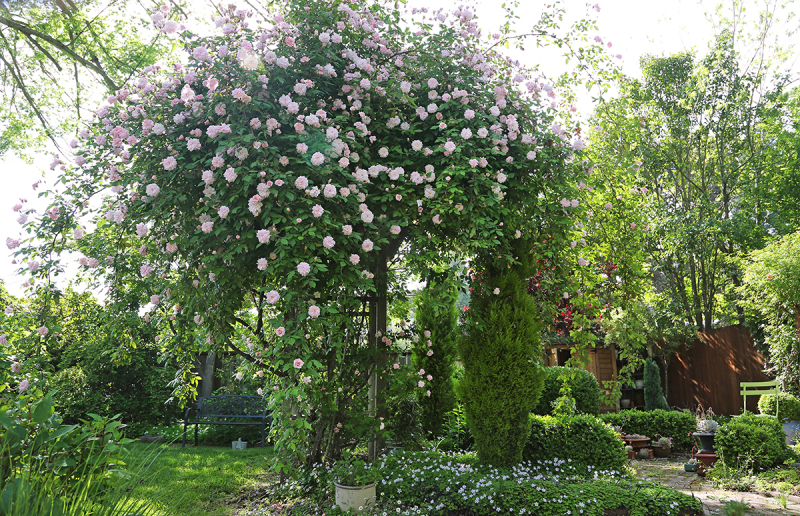 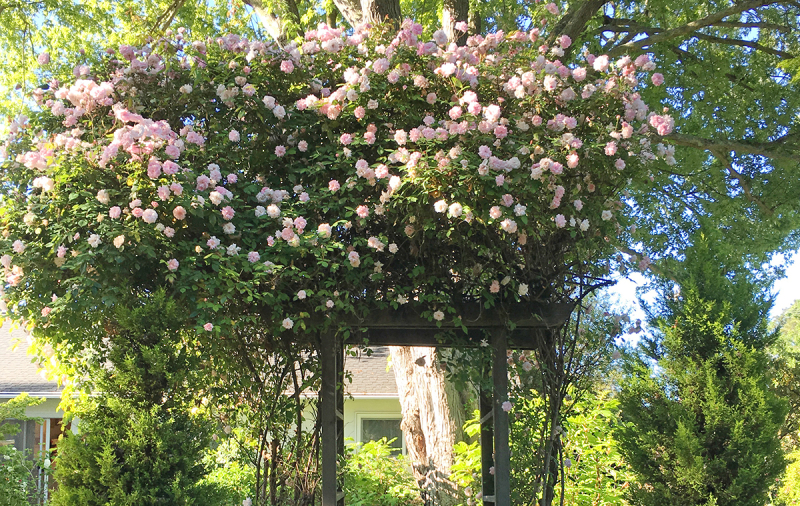 Below, as always, I love to show you glam shots of the blooming beauties. In the first image, a harvest of panicles (a group or cluster of flowers on a stem) in tied posies. The bouquets in the next two shots were created at Cecile's peak moments that particular spring. An Indian silk chiffon shawl inspired a lie-in for the last shot. Roses love to pose. 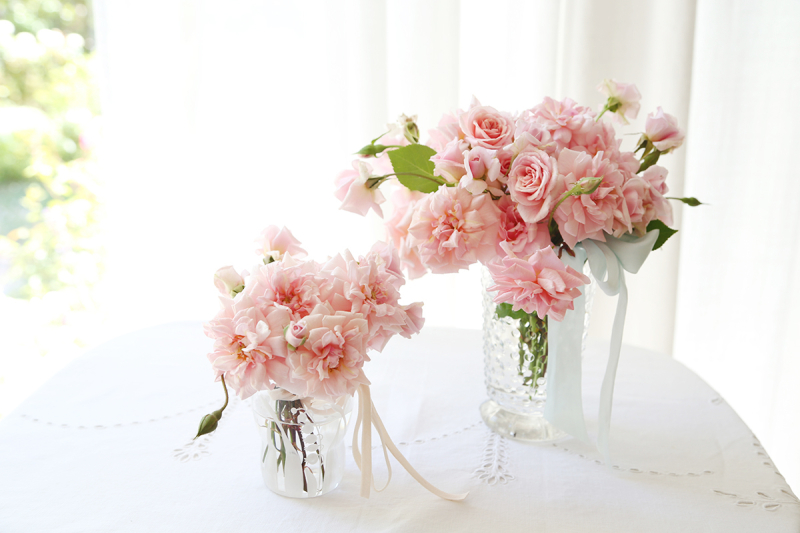 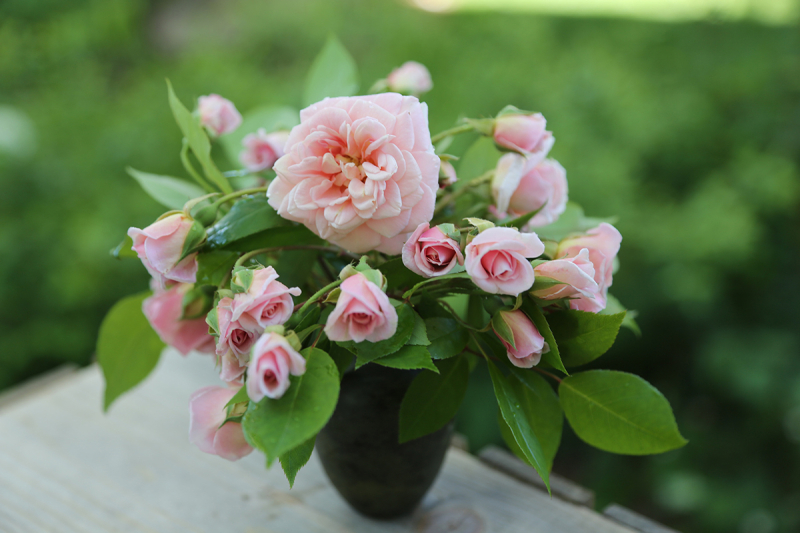 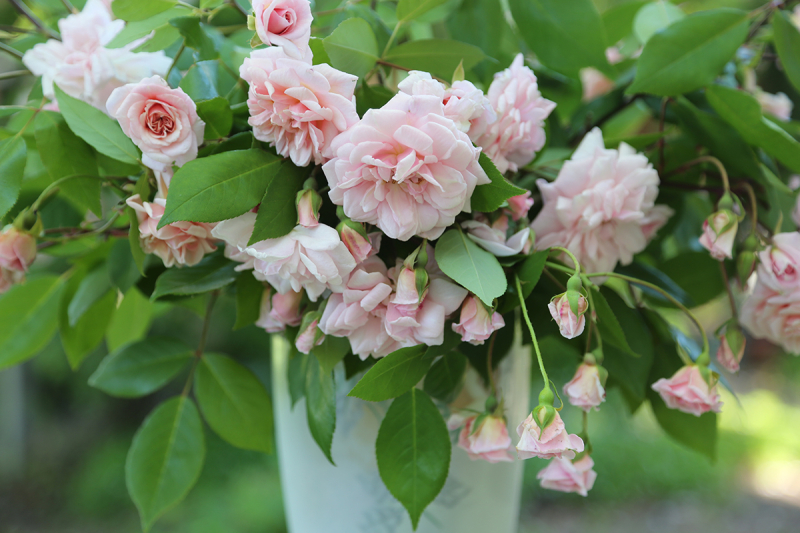 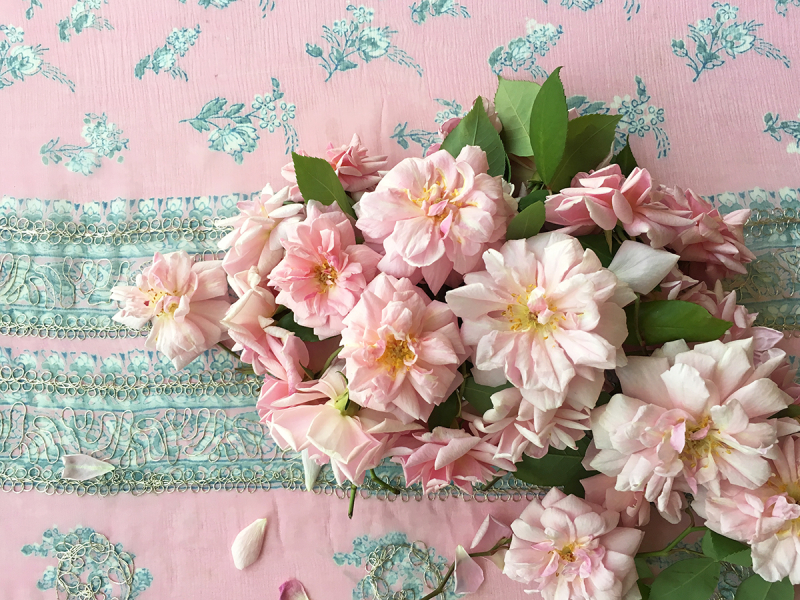 Cecile has sharp thorns and is extremely vigorous. Unless you have unlimited space where the twenty foot climber can grow wild, or you have an old building you want to camouflage, this rose requires no-nonsense pruning by a strong person wearing sturdy leather gloves, who can work on a ladder and make cut after cut with arms raised. 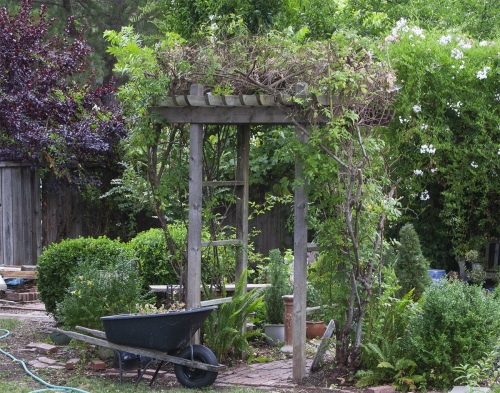 Our sturdy pergola was built in 2001. Shown here a few years later, Cecile is  looking tidy after a big pruning. However, as you can see from the shots above she eventually got away from our control as the top growth got higher and higher.

I love to change pruning styles from year to year. Some years, I let the canes droop down in big swags, and other years they would be cut as short as possible for a more compact look. 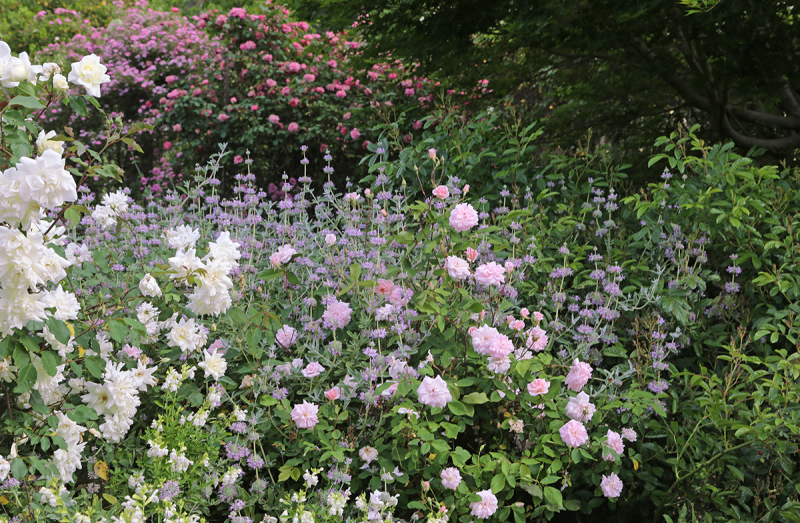 The original shrub grew no taller than five feet and was named Mlle Cécile Brunner.  It was hybridized in 1881 at the Ducher nursery in France, and named after the daughter of a Swiss nurseryman. When the shrub found its way to California, one of the canes grew out eight feet, was cloned and became the climbing variety, which is formally named Climbing Cecile Brunner. If you go to helpmefind.com, you'll find many more varieties.

Above, the shrub form is shown in my former garden. In 1976 she was lifted from her garden bed of many years and moved to two more homes, moved again in this garden three more times, and now crowded by salvia and receiving little water, is still blooming and giving love through her depth of beauty 48 years later. Says something about longevity doesn't it.

Both the climber and the shrub are disease-resistant, and  shade tolerant from zone 5 to zone 10. I've never seen blackspot or mildew on them and as-a-matter-of-fact, nasty insects stay away as well–a charmed life! 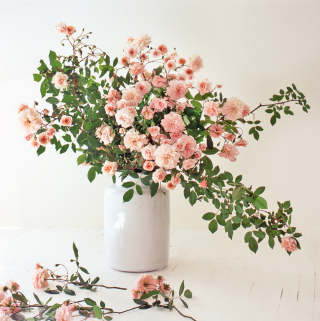 Welcome to many new subscribers!

I hope you enjoyed this post. Please don't be shy–introduce yourselves, I'd love to hear from you. If you grow Cecile Brunner let us know your experience and where you live.